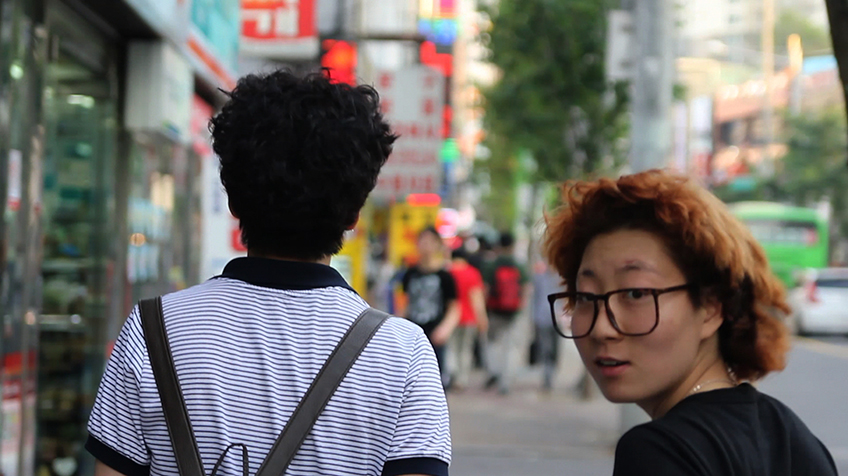 Eun-jung is afraid of becoming an adult, Seung-hee wants to grow up fast to own her own things and the feminine Song-ha buys cosmetics and changes her hairst yle any time she has the oppor tunit y to lay her hands on a sum of money. W hat these three girls who are at the last stage of their teenage years are mostly interested in are romance and looking cool. Unlike their carefree appearance and uninhibited at titudes, they each have personal issues that drove them out of their homes and seek refuge in a shelter for women in distress called ‘ W-ing.’ As they nonchalantly relate why they had to live on their own it is not dif ﬁcult to detect shadows lurking behind their eyes and expressions. The ﬁlmmaker Lee Suk- gyung drawn to the self- conﬁdent demeanor of the girls she came across by chance follows the stor y of the runaways as they grow into adults during a course of 3 years. At the same time the ﬁlm also becomes the ﬁlmmaker’s self-journal. Like the girls who experience growing pains, the ﬁlmmaker, during the 3 years she spent with the girls meets the greatest turning point of her life. Wear y of personal problems and over whelming ﬁlm work, the ﬁlmmaker had fallen into a state of deep depression until this ﬁlm she had no substantial expectations toward at ﬁrst gave her the strength to face a new life. Without making any rash assumptions before the girls speak, the ﬁlmmaker develops a bond with them which eventually shines through the ﬁlm. For the girls, the time has passed when opening their eyes in the morning was just another day of dealing with a dismal realit y as they seemed to have reach adulthood in the true sense. Life may still hur t and be overbearing but now they are not afraid to make small but bold steps into the world. (CHUNG Woo-chung)