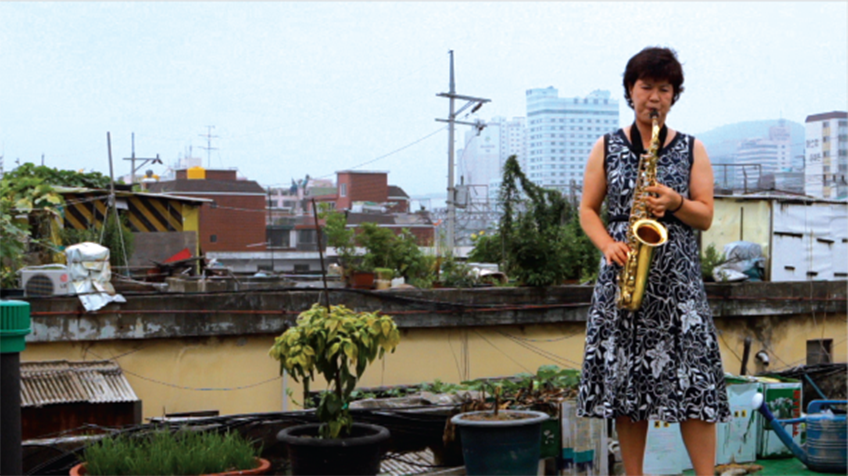 What do you see in the Chinese character “安(an)”? 1) A woman is in a house, meaning everything is going well. 2) A woman is wearing a hat like a shaman, meaning the world is ruled by women. 3) If the character is turned upside down, it looks like a woman jumping to her death. A place that used to be one of Korea’s biggest industrial cities, where ancient history and modern history retain interesting links, and where the sorrowful spirits that were killed by water and fire have not been comforted yet – this place is called Anyang. Projecting facts and fictions about modern Korean history and women’s tragedy, resentment and vitality into the city of Anyang, Anyang, Paradise City suggests that Anyang embodies all three meanings of the character. In 1988, a few months before the Seoul Olympic Games, the fire in Green Hill sewing factory in Anyang took the lives of 22 female workers who were sleeping, locked inside the factory. Starting from the deaths of these women, the film looks into the history of Anyang and uses real-life incidents – excavation activity at Anyang Temple, the catastrophic flood around Anyangcheon, and clashes over redevelopment sites – to weave together ordinary landscapes of people’s lives and the stories and images of a mythical and surreal atmosphere. All of this is designed to console the pitiful spirits of the dead hovering over the city of Anyang, and the film emphasizes water that sounds as if it is flowing into one’s last home in a fiery exorcism to lay dead souls to rest. This marvelous film records uneven and fragmented stories, images and sounds that move between life and death, reality and fiction, reviving a history of hurt, imbuing a lifeless place with cinematic vitality. (Nam Da-eun)