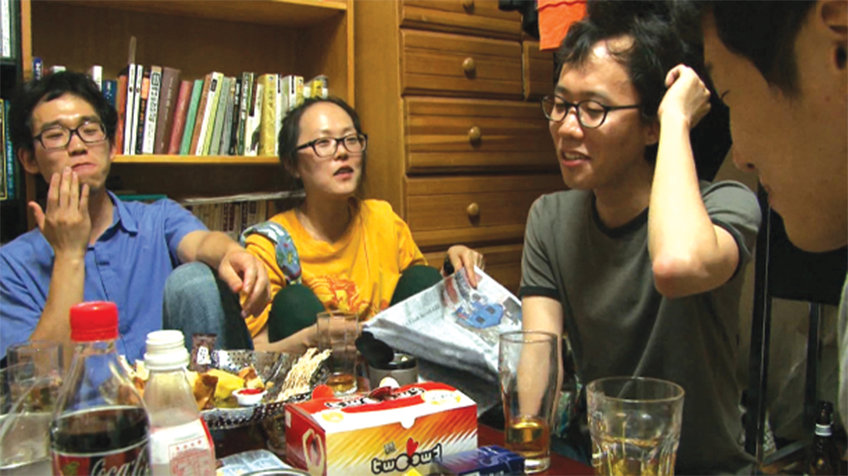 Bottoms Up! is a little anomaly in the field of Korean documentary films, which tend to lean toward grander themes. After watching this film, which captures moments of bar talk, you will be wondering whether the scenes are real or directed. Even if they were not real, we would be captivated by this film all the same. Alcohol is a symbol of decadence, a medium of communication, a stimulant that creates a vibe, and an ingredient of grief that makes people sentimental. Each paragraph observes different relationships of people of different ages, centering around the subject matter of drink. And it manages to capture that liveliness peculiar to bar talk in its entirety. Although the film does not present its own interpretation, that attitude only adds to the charm of the work. Through bar talk, people let out their hidden emotions after they have consumed enough alcohol. Interestingly enough, this film describes bar talk as a positive field of relationships, not as a wasteful social convention of Korea. The director does not hide her intent when she describes the event as a moment of understanding and sharing, rather than a moment of conflict and clash. It makes the audience feel the positive energy that comes from bar talk, although in a sense it makes the film emotionally monotonous. If the film cast a stronger light on the occasional hints of conflict between its characters, it might have succeeded in revealing the duality peculiar to Korean bar talk. That being said, Bottoms Up! is still an interesting documentary that takes a microscopic approach to stir up emotions not reducible to a single word. (KIM Young-jin)