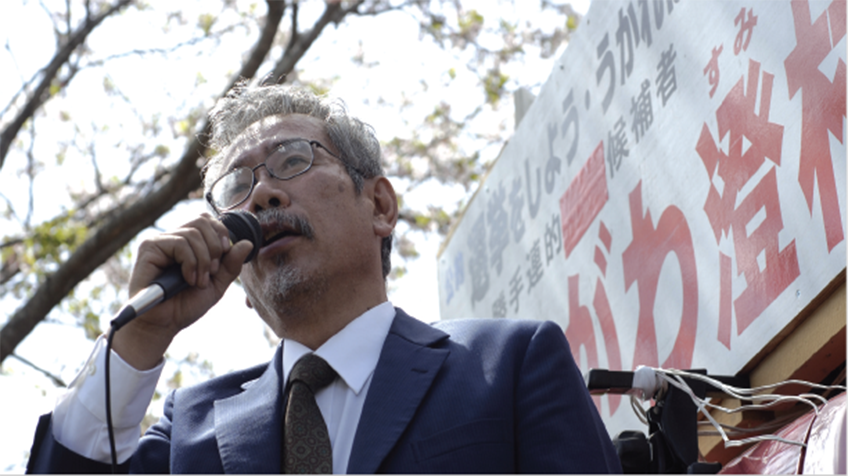 Election, in Japan 2 (in Town Kuroshio, in Kochi Pref.)

The first question that pops up about this film is: Why Japan? Why does a Korean independent documentary director pays so much attention to the election of the chief of Kuroshio, a small town in Japan with a population of 13,000? This question, however, is eventually answered as the film plays out. The film shows how Sumimura Ninagawa leaves his hometown, Kyoto, and decides to run for the town chief of Kuroshio. In Japan, the construction industry had been crucial to breakneck economic growth, but after the bubble burst it has lost its ability to create jobs. Nevertheless, so many local governments, including Kuroshio, are frenziedly wasting government subsidies, constructing facilities and buildings that will remain unused. Mr. Ninagawa challenges the complex of interests and conspiracies behind this practice, offering provocative suggestions. But the audience is not always sure if they can trust this heroic character. Several commitments he makes to win the hearts of young voters – creating 200 town council seats and subsidizing plastic surgery – are actually chimerical. Residents start to doubt his intentions – and so does the audience. They think he must be a swindler, or a Don Quixote at best. The film maintains a careful distance from this eccentric character that overrides common sense and conventional wisdom. But at the same time, in this one-man campaign show, we encounter the irrational rules of the election system and realize that democracy could end up being the worst system ever. Only when the director, who has seemed neutral all along, calls Mr. Ninagawa’s opponent “the enemy,” do we clearly perceive the director’s intention. Overlapping the reality of Kuroshio is the landscape of Korean society. And this provides a moment of epiphany for us: the Kuroshio case is a hard lesson we have to learn. (MAENG Soo-jin)