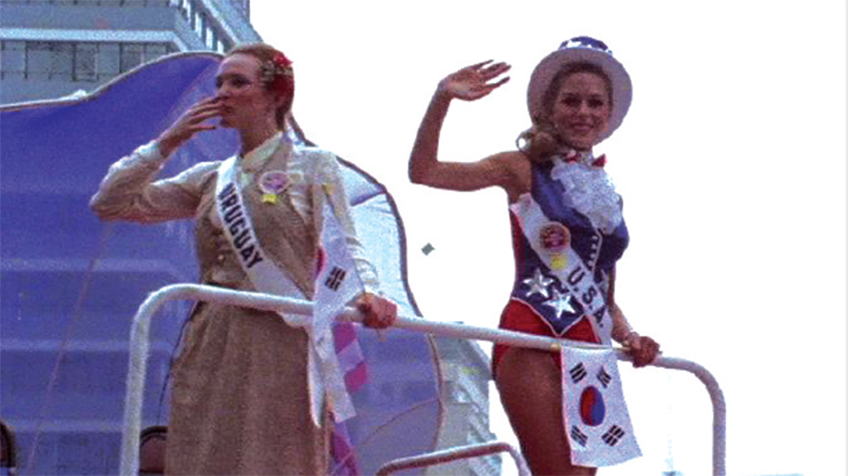 An Escalator in World Order

This film begins with a very unusual scene. As the camera ‘tracks-in’ toward a rail road, people scatter along the rail. Then, a parade of US troops in Korea, accompanied by an image of Rhee Syngman the first president of S. Korea. Over these images, the Pathetic Symphony by Tchaikovsky plays. The choice of the Pathetic Symphony hints at the main sentiment of this film, which is deep grief. By creating a montage using newsreels, archival footage and the recordings of the director, with Tchikovsky’s “Pathetic” and Bach’s “Air on the G String” at its beginning and the end, the film expands the gap between reality on the one hand, and, on the other, the pseudo-religious faith in the United States that has taken deep root into Korean sub/consciousness. The director objects to his work being categorized as a historical documentary film. Even though the film tells us about the relationship between Korea and the US after the former’s emancipation from Japan, the final destination of Korean capitalism as it nears climax of neo-liberalism, and the interactions between state ideology and the individual, collective and religious faiths of those living in Korea today, it does not seek photographic, historical reality. Rather, it tries to enter the realm of the religious and the mythical. What does the process of re-editing footage found at warehouses full of government propaganda mean to the director? To risk a bold assumption, this independent documentary director must find this method very fascinating, as he distorts the context of the official records using a combination of state-of-the-art techniques and aesthetics, thereby creating a counter-history. The director executes his vision in an enormously smart and economical way, and he is getting better at that. (MAENG Soo-jin)