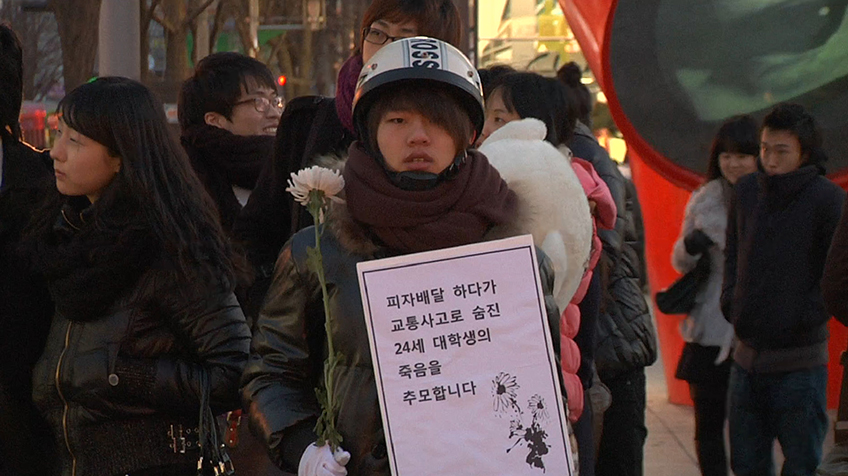 Since the strong winds of Neoliberalism during the 21st centur y, ‘pover t y’ and ‘unemployment’ has become the fate of those who have fallen back in the struggle for existence in this jungle called, Republic of Korea. Ever yone born on this land have been placed onto a meticulously designed conveyer belt to pass through kindergar ten, elementar y, middle, high school, universit y and a workplace until they slowly fade out of the picture. To solve this ‘vanishing’ phenomenon, a couple of young people teamed up to set up ‘Youth Union,’ Korea’s ﬁrst representative union of young people in their 20 -30s. A nd by doing this, they star ted to boldly challenge this ‘craz y societ y’ they’ve been cast into where young people have to satisf y hunger with instant cup noodles, indulge themselves into self-improvement and TOEIC ( Test of English for International Communication) books while risking their lives over super-speed piz za deliver y. For these young people with all dif ferent kind of jobs and addresses to come together in the name of ‘generation’ and let out their voices was not an easy task. But this unconventional union made up of young, immature ‘kids’ went beyond just being an interest group that fought hard to get exploiting employers to pay outstanding wages and became a communit y based on understanding and solace.

The experience of sharing each other’s concerns minus the level of education or occupation became the solid ‘credential’ and ‘competitiveness’ they needed. T hree years have passed since its inception in 2010, and so many young people are still forced to sacriﬁce their youths to sur vive in a world full of violence. It will probably take quite some time to face the self- defeating question of “Can a life like this be called ‘youth’ ?” but a ﬁlm like this gives one conviction that armed with a lively and healthy spirit, the ‘ Youth Union’s’ ﬁght will not end so easily. (KIM Ha-na) * Funded by DMZ Docs Issue 2011