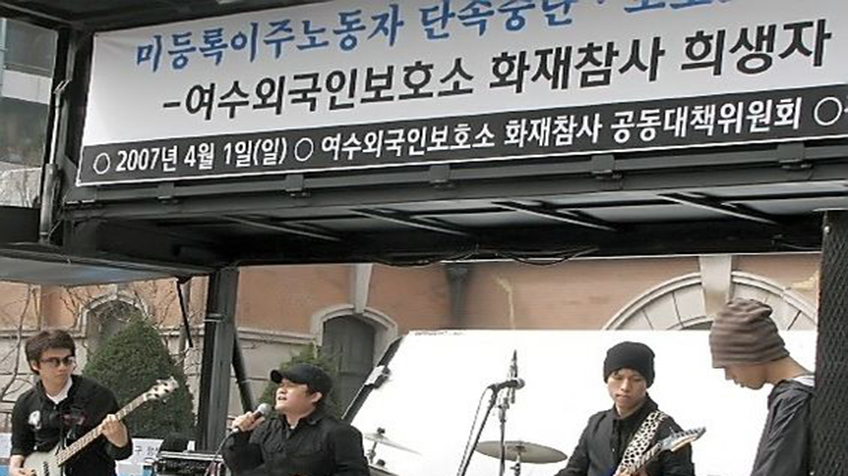 It’s commonly known that money travels without borders while its laborers can’t. It raises questions, but answers are hard to ﬁnd. Minu lef t home in his 20s and has worked abroad for 18 years. But he’s suddenly sent back home. Now where does his dream go? To his hometown where the family waits for his sending money home? Or to the foreign count y where he used to sing with his colleagues?

W hy does the countr y see migrant workers so- called ‘impor ted hands’ as disposable or replaceable while relying on them for its industr y? Buried in Tears follows the migrant workers in Korea and their music band ‘Stop Crackdown’ formed in 20 0 3. As they sing of the countr y, Korea still remains a grave where these migrant workers are buried just like 30 years ago. Only dif ference bet ween past and present is their nationalities. Unregistered migrant workers are kidnapped in broad daylight and hauled of f to the immigration detention center. T his ‘beautiful democratic countr y’ doesn’t even bat an eyelid when they have been killed af ter ﬁre swept through the lock-up facilit y. T he documentar y takes a ferocious approach to reveal the countr y’s brutalit y through rock ‘n’ roll music of ‘Stop Crackdown’. But the camera, in silence, watches the band cr ying tears when the lead singer Minu is forced to leave the countr y. There is no proper word for their devastation in mind. (SHIN Eun-shil)