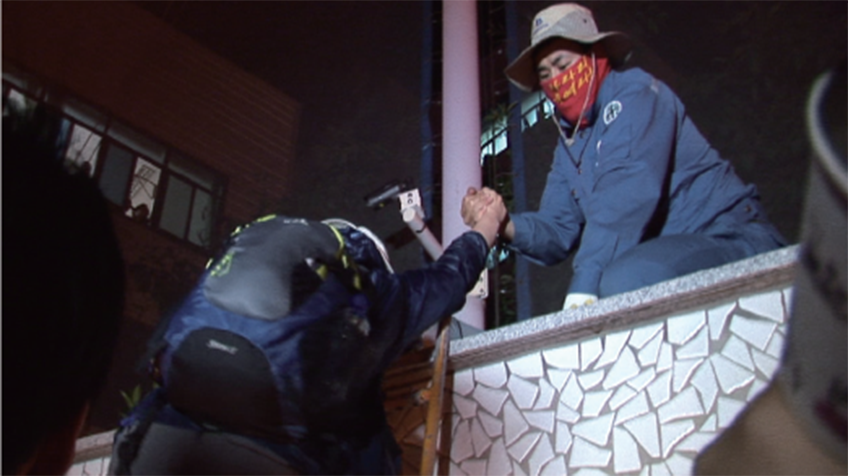 Get on the Bus

A comrade who had joined the ﬁght against merciless layof fs for 129 days on a shipyard crane ended her life by hanging herself. Ten years later total strangers gathered under the crane to save another female laborer who had been protesting for 157 days on it for the same reason. In spite of tear gas and club at tacks, rain and having to sleep on the road, they continuously publicized to those who could not join the bus ride heading for the protest site, the shameless atrocities of unjust layof fs. Finally, on the 30 9 th day, the female laborer ended her protest and voluntarily came down the crane. The agreement made that day hasn’t been kept in the proper sense, but things have deﬁnitely changed as the public are now more open to group gatherings at various rally locations such as Daehan Gate, Seoul Plaza in front of Seoul Cit y Hall, P yongtaek and Jeju Island. This is the stor y of people who have fought against unpredictable time constraints to inter vene in an ‘unbending situation’ with a spirit that went beyond all obstacles, drawing in a new crowd and adopting dif ferent methods of action to overcome it all. They are the ones who stood by ‘truth’ and became the true ethical masters of a collective fate. In this sense, the ‘Hope Bus’ was an ‘Event’ (quoted from A . Badiou) for South Korea during the year of 2012. Get on the Bus faithfully follows the ﬁve trips made by the ‘Hope Bus’ testif ying to its journey. (SHIN Eun-shil)