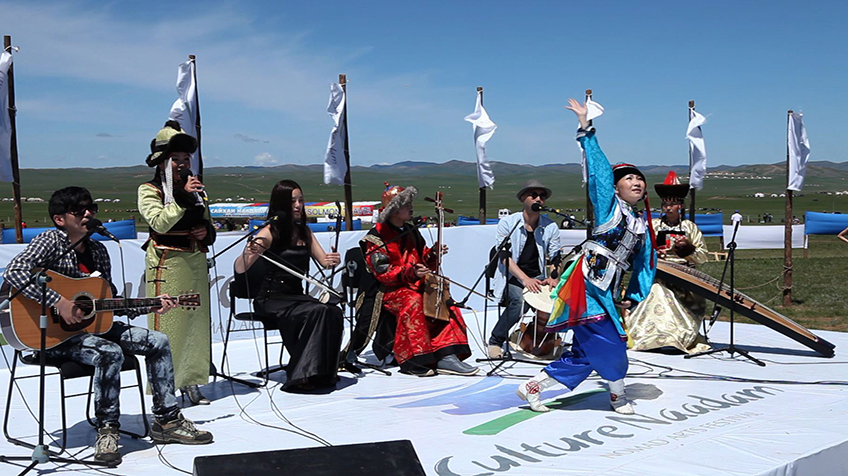 Wind from the Lake

Musicians Lee Juck and Ha Reem familiar to the Korean public set off on an creative nomadic journey to Mongolia accompanied by Korean artists including a Haegum (Korean ﬁddle) player, dancer and sculptor. They are joined on their trip to South Gobi by Mongolian artists consisting of a Morin Khuur player, singer and a dancer from which they receive artistic inspiration to perform at the Naadam Festival in Ulan Bator. As a nomadic music road movie, this documentary captures how art is created and performed amongst the daily lives of people instead of the stage and becomes part of an ordinary reality. There is also pleasure in witnessing the process of creating exotic yet universal human harmony as Mongolian traditional art meets with Korean popular music. Communication may not be efﬁcient through language, but creative pains open them up to a mutual understanding. As they offhandedly compose, play their instruments, dance and sing they become closer to each other like family. The ﬁlm follows the group as they trek through the vast Gobi Desert which reveals the breathtaking landscape. And the Mongolian long song sung to the melancholy tunes of the Morin Khuur touches the heart with the ageold Mongolian tradition of empathizing with animals. Ha Reem learns Hoomii the uniquely Mongolian way of singing and applies it to the vocals of his songs. Harmony created through Mongolian and Korean traditional music as well as Korean popular music unfolds before us in an unfamiliar yet warm way as these artists’ senses are presented not in wordy explanations but images. And at the same time, the marvelous emotions inspired by nature and animals are expressed in sound and hand-made imagery. This is truly an amazing piece of work which presents an entertaining observation of celebrities, the joy of experiencing sophisticated performances that one cannot easily come by, the beauty of nature’s greatness and the encounter between diverse cultures. (JEONG Min-ah)