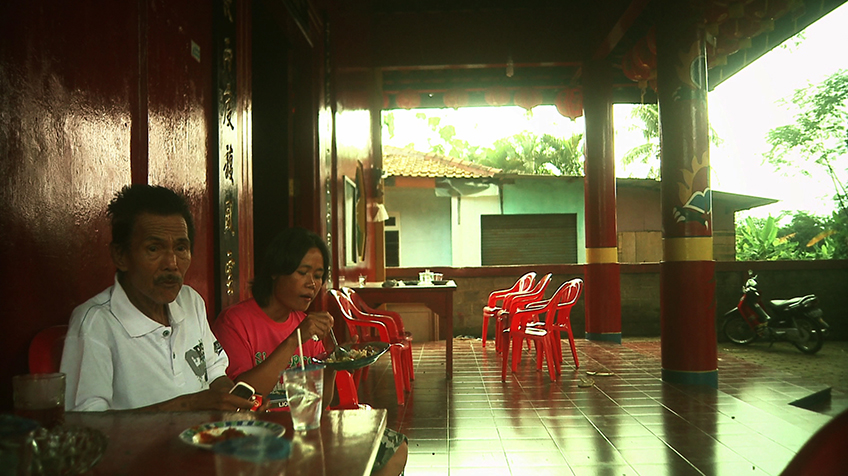 The Dragon Who Walks on the Water

The Dragon Who Walks on the Water is the second feature-length documentary produced by Indonesian video ﬁlm group Forum Lenteng and Akumassa who are recognized for their consistent documentation of the lives of ordinary people through a body of video shorts work. This time they seek old man Kang Sui Liong of Chinese descent who has been tending to a Chinese temple for the past 23 years with his wife and young son. As the camera quietly observes their life along with the red lantern and small details that occur underneath the temple roof, Indonesia’s modern history unfolds before our eyes. Ten years have passed since the 1998 democratic reform but stories on Chinese-Indonesians seem to linger on the borders of ‘too much’ or ‘too less.’ Under the Suharto regime, Chinese-Indonesians were forced to endure having their existence totally denied for the past 32 years. Chinese language was banned as well as Chinese names and anything Chinese whatsoever. Born in 1939, Kang Sui Liong would have lived through the founding of Indonesia and the Suharto dictatorship. It was ﬁnally after 1998 that it became possible to mention the notion of Chinese, and in this light it seems natural that as offspring of the 1998 democratization, Forum Lenteng and Akumassa have chosen Kang, a Chinese-Indonesian who lives on the margins of society as the subject of this ﬁlm. Kang’s past and his son’s uncertain future set against the red temple presents themselves as fragments of the days of hardship Indonesians had to bear after the country’s democratization. (PARK So-hyun)