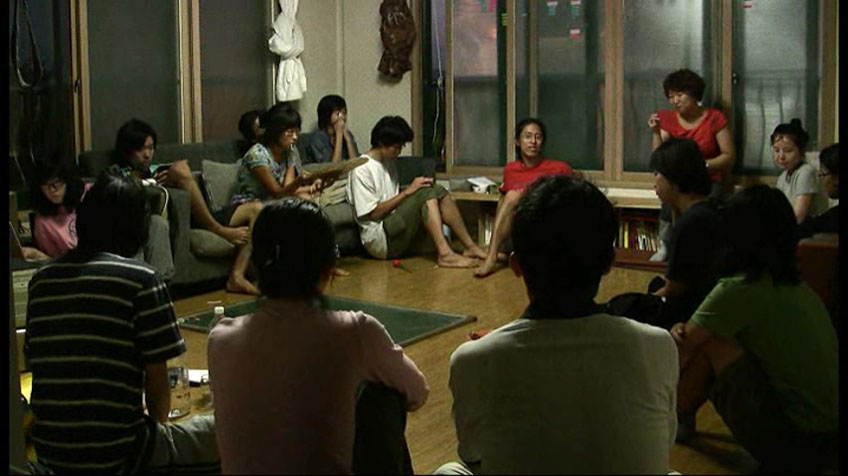 ‘Home’ is an economic shackle in modern societ y. People save up most of their income and turn to mor tgages to buy homes. As they can’t af ford repayments on a principal & interest basis, they put their assets up for collateral. While those who live in rented homes feel deprived about not being able to af ford one, those who own their homes struggle to pay their mor tgage. T hey are all trapped in a vicious circle of cash poor and asset rich. It is because people are obsessed with buying their own proper t y for the good of the family. Counterattack is about people who break free from the shackles of home and revitalize their lives. People ﬂock to Haebangchon, a district of Yongsan- gu in Seoul, and set tle into empt y houses. Ever yone is welcomed there and ever yone can own the house regardless of sex, race, age and job. T he residents cluster together and choose to live in pover t y at a slower pace. T hey sit around in a circle to discuss whether to accept anti-paciﬁsts. T hey come to an ethical but naïve conclusion that people should not be judged by their appearance, just like saying goes, “men and melons are hard to know”. What does it mean for them to be unfet tered from the shackles of time and desire to possess? T hey share ever y thing eating, playing, creating, discussing and studying together. T hey realize their own vision of the good life in the ideal communit y. Counterattack closely follows the process of sustaining their communit y by set ting up their own economic policy and overcoming the hardship. As the stor y of these genuine paciﬁsts unfolds, we learn that they live a more adventurous, productive and abundant life despite ﬁnancial insuf ﬁciency. (JEONG Min-ah)