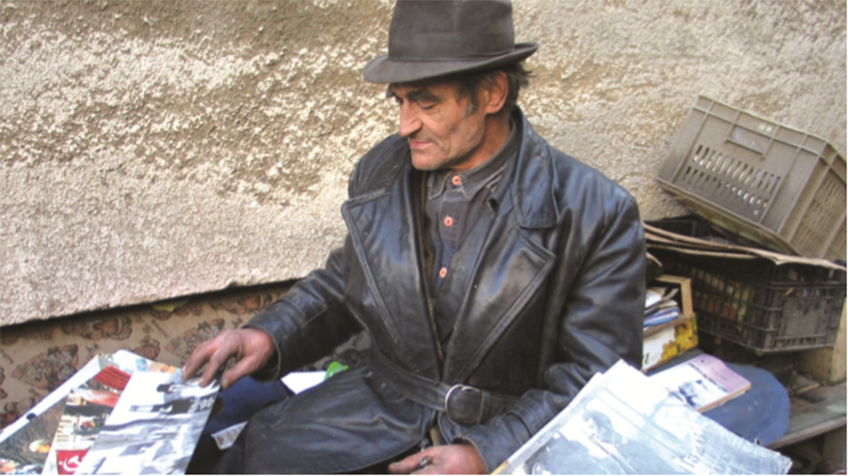 The World According to Ion B.

Ion B, 62 years old, is a homeless man living next to an old apartment building in Bucharest. He seems pretty content about his shabby life of clearing garbage from the apartment and relaxing with cigarettes and alcohol. This man, who always looks so relaxed even when clashing with his neighbors, turns out to be an artist with an extraordinarily free artistic spirit. An aspiring film director when young, he is now making collages with photos and pictures that he collects from discarded magazines on the streets. He has made more than 1,000 pieces since the 1970s, through they years during which Ceausescu suppressed and banned such forms of art. In 2008, these hidden treasures were ‘excavated’ by a gallery owner and since then Ion B is no longer called a lazy bum, but recognized as a unique artist. This film captures the trivial but funny behavior of this long-time homeless man, observes his serious way of working, keeps track of his clumsy adaptation to his new lifestyle, and listens to the secrets of his life over the past several decades. What is most interesting is how the artist, who has never received any kind of formal education, creates artistic pieces using a method he taught himself, a process which is very elaborate, creative and pleasing.

From his favorite Hollywood actors to the world’s iconic politicians, including the hated Ceausescu, the content of his work is diverse, surprisingly political and brilliantly humorous. When someone calls his work pop art, with reference to Andy Warhol, he looks back with innocent eyes and asks “What’s pop art?” Then we feel like asking, “If not a genius, what are you?” I can guarantee that no one will find it difficult to love this man, who is optimistic and full of vitality, ignorant about the world affairs but capable of creating a world of his own in his work. (NAM Da-eun)​