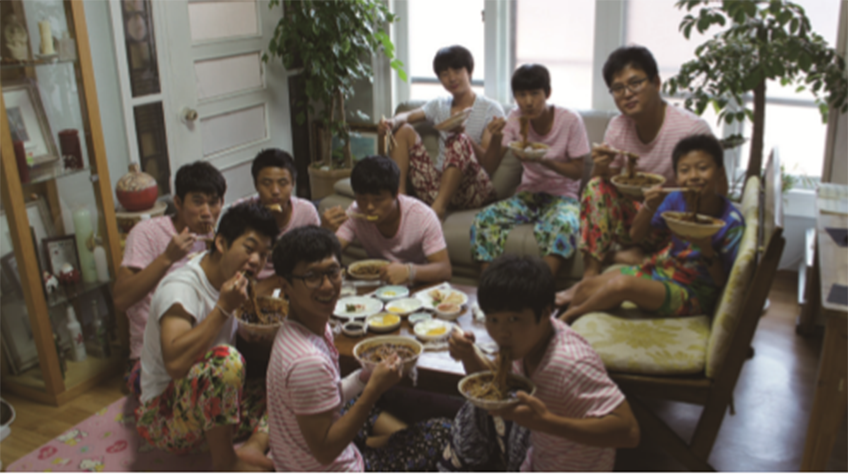 High school seniors Jin-chul, Won-hyuck, Deok-soo, juniors Ha-ryong, Won-il, Jin-woo, freshman Eok-cheol and middle school students Jin-beom, Cheol-jin and elementary schoolchild Cheol-gwang. These are all North Korean refugee adolescents. They escaped from North Korea and came to South Korea in between 2002 and 2013, all in different times. They go to regular schools now and live in a group home called ‘family’ with the teacher KIM Tae-hoon whom they call ‘uncle’. Our Family is a lm that recorded a year of this ordinary but special family. Having eleven main characters, it must have been difcult to shoot every single one’s story. Therefore, the lm focuses on the children’s uncle, KIM Tae-hoon. Kim once gave his family the elbow, but eventually chose his life as a guardian as well as a friend and most of all, as a great supporter for the children. In reality, North Korean refugee adolescents rarely reveal the truth that they are from North Korea, but Kim’s efforts have helped these children to adapt to South Korean society without inching and even proudly open where they’re from. While the family members lean on each other and grow together, the lm quietly represents their life. Among ordinary days, there were special incidents for ‘North Korean refugee adolescents’, for example, Jin-beom runs for the students’ representative and election, which could be a burden for himself, for the family, even for the school. But the lm doesn’t make a great fuss about these events and it’s the biggest virtue of the work. Our Family looks a bit crude, unskilled and somewhat distracted. However, I think ordinary life does so too. Its story of North Korean refugee adolescents’ condence, unaffected smiles that have never been seen before is beyond comparable. (HUH Kyoung)