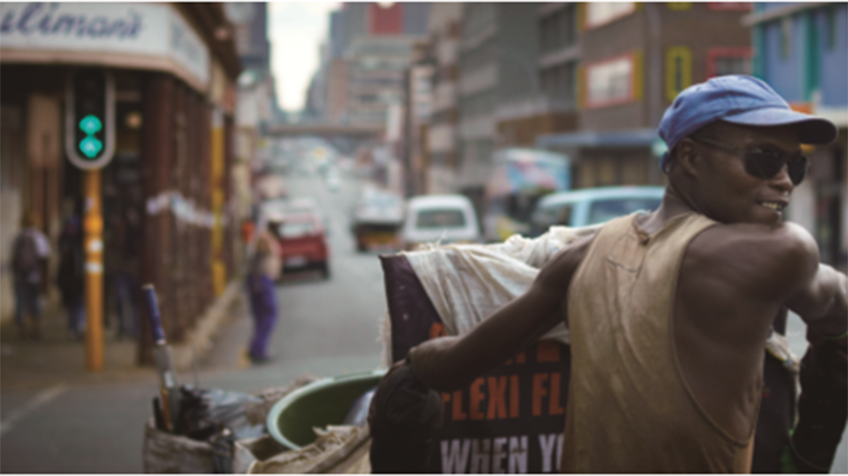 Jeppe on a Friday

Jeppestown is the oldest suburb in Johannesburg, South Africa. Two female directors, Shannon WALSH and Arya LALLOO, record 5 city dwellers’ lives in Jeppe for a day, Friday, March 9th, 2012. Lives in outskirts of a metropolis don’t look that different from those inside of it. Naturally, a metropolis is occupied with people who live capitalistic lives under the structure of several classes determined by the economical and social state, with national identities erased. Anyway, the 5 people are a property developer considered the middle class, a Jeppe-native (for 65 years) grandpa running an art supplies store, a poor who collects recycling wastes and has a dream of becoming a gardener, an immigrant successfully running a restaurant on the basis of family-centered life, and a musician leading a male Zulu chorus who live at a hostel in their enclave. The directors imprint commonness as human-beings on all of them by making them share daily behaviors like eating, drinking, and working. With these universal looks, metropolitan lives feel more familiar. Then, in what point are these daily records on the spot different from other metropolitan lives? In the case of Jeppestown, it’ s found on old habits and the traditional class structure. They do different religious behaviors. A garment reveals he is from another ethnic group. The life at a hostel for males in an enclave. White people are capitalists, businessmen, teachers, building owners, or residents in a house with a garden. Rejection of immigrants or dislike to foreigners are common in many metropolitan societies where the number of immigrants is increasing, but it makes you sense the tendency for the ultraright nationalism that the dislike to foreigners among African ethnic groups is getting overt even after South Africa had a hard time for that severe segregation policy. Although African National Congress (ANC) still has won the position of the ruling party since Mandela, the politics has fallen into a distant world from the poor in the city, seldom influencing their daily survival. Through Jeppestowners, the two directors describe closely where Johannesburg, the largest metropolis in South Africa stands and the lives there in terms of empiricism, which leads to the recognition of global phenomena and regional characteristics. (HAN Song-i)