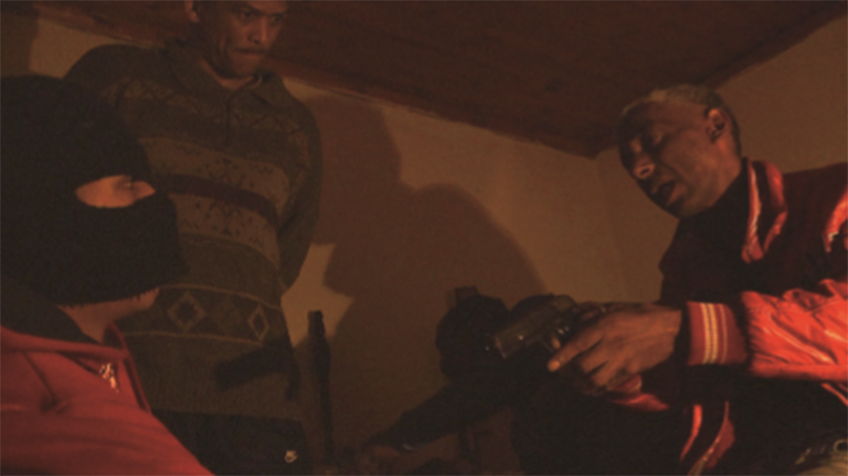 It’s been about sixty years since non-white people were forcefully moved to the suburbs by one of Apartheid policies in South Africa. Cape Flats, located in the outskirts of Cape Town, makes its mark as a city with the highest homicide rate in the world due to a turf war between drug organizations. The main character of the documentary is Braaime, the leader of NTK (Nice Time Kids), desperate to protect his family and his gang from the other two groups. Surprisingly, these three drug-smuggling groups have grown up together in a small area, so they are all neighbors knowing each group members’ names and characters well. Nevertheless, they are pointing a gun at each other because of, to borrow Braaime’s words, greed. But this war is another name for poverty and survival and an economic activity of one breadwinner to prepare a transportation card for his kids and to provide food, clothing and a neat shelter for his family members. There are no symbols of a gangster movie at all such as a black suit, a straw hat and a machine gun. Wearing hip hop clothes, they borrow old pistols and count bullets one by one for fights. Filmed in cinema verite style which gives a sense of realism, the documentary frankly presents the sound of gunfire in real time and the appearance of exhausted leader who teaches gang members, makes drugs and prepares for attack in a little bedroom with one light on. He didn’t want a life like this but this is everything that he learned from his father. From Braaime’s voice saying he wants to live somewhere else when everything is cleaned up, we can’t find any kind of authority in him. This documentary shows the truth of a gang in poverty area which gangster films can’t represent through Braaime, his family and his fight. During the fight, residents of Cape Flats visit Braaime to get drugs. This makes the audience realize the matter of outside the gang from within. From the scene, we can guess their customers are their neighbors and there are so many local residents addicted to drugs that they even need a turf war in this tiny society. Although we can’t support the life Braaime chose nor agree with his attitude to the life he thinks as fate, other choices don’t seem to be easy to be made. The only thing that this abandoned area needs is a miracle. (HAN Song-i)