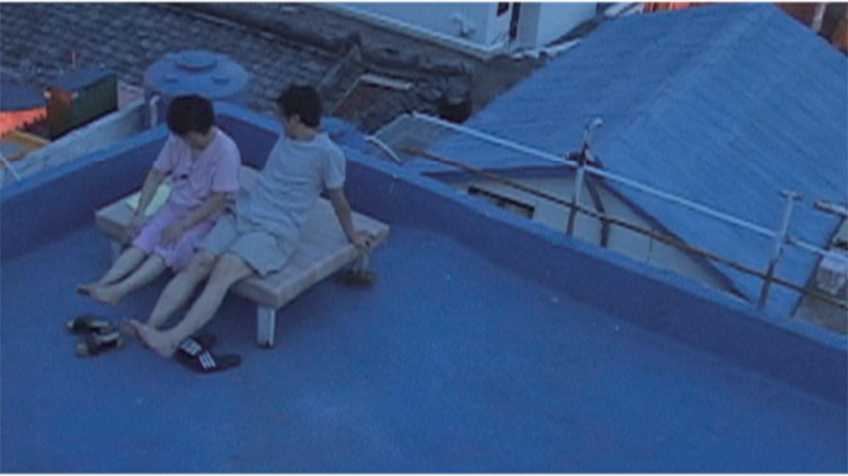 This lm begins with the camera slowly revealing someone’s face under the red light in a darkroom, increasing the curiosity over the person’s identity. While living with his mother, the director learns, just before going abroad to study, that his father is alive. Regardless of the new-founded father, the lm shows many happy images of the mother and her son. Most of all, the mother’s character enriches the story, creating trivial, but funny details. The lm portrays diverse scenes of the loving mother and son: the mother shedding tears when she sees her son, reciting the alphabet she learns at church, scolding her dog in the room, dropping tears while singing her favorite song, taking a picture with her son and catching mosquitoes for each other. Some intermittent scenes reveal how the mother had to live apart from her husband and her hidden sadness after spending many years with her son alone. The director is worried about his receding hairline. While wondering about the cause, he later hears from a doctor that his hair loss is very likely to be hereditary. His symptom reminds him of his father, and after long contemplation, he nally decides to go see his father. Both the director and his father remain very composed after all the years of living apart. Without any dramatic emotions, the camera calmly shoots the father’s images, and the reunion of the father, mother and son is nished with an air of awkwardness. When the episode is about to end, this documentary lm shows the director visiting his father one year ago without identifying himself. In this ashback, the father talks with his son without knowing it and the son asks his father about his past with pretended innocence. Unraveling the unusual family story, the lm suddenly creates a high emotional tension. And the subtitle in the last scene about the absence of the father also adds plaintive feeling. This documentary seems to have a simple composition, but it has rich details completed by the highly calculated direction and editing, as well as the inserted scenes with ample landscapes of the neighborhood. (CHO Young-kag)