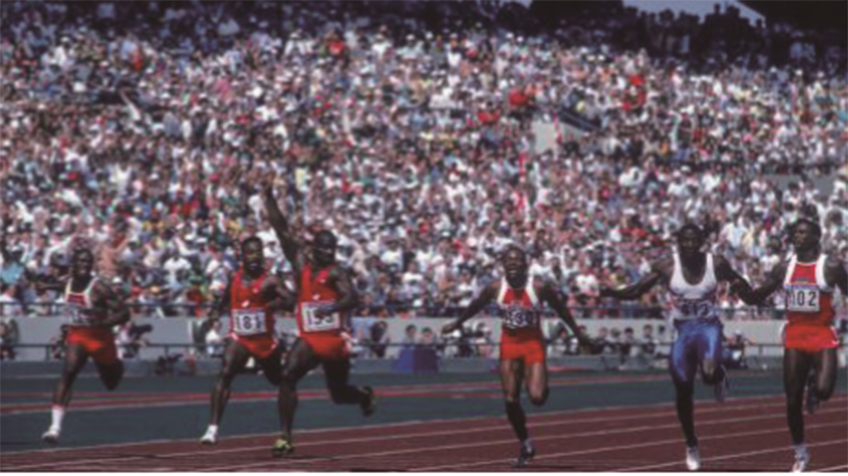 Do you remember the drug scandal where Ben JOHNSON won the 100m final at the Summer Olympics in Seoul in 1988 but was then disqualified for a positive doping test, losing the gold medal? The film starts on that track at that exact time on that day. Eight of the greatest athletes in the world are waiting for the signal at the starting line. At the starting signal, eight runners shoot forward, a Canadian sprinter, Ben JOHNSON lowers the world record to 9.79. The film throws up a question through the different looks on the faces of Ben JOHNSON and Carl LEWIS. What on earth happened to them on that day? The film tracks the first case of a winner stripped of a gold medal at the Olympic because of drug-taking through the narrative of a thriller. It offers the interviews of eight characters standing at the starting line at that time and the archive footage and reenactment indicating the story between Ben JOHNSON and Carl LEWIS through cross cuts. In their mixed statements, we hear not just their words but their delicate emotions along with their facial expressions. When we see envy and desire, the truth of sporting world, rights and interests in the industry, furthermore, the vast conspiracy that even places pressures between nations was involved, we can’t help but to laugh at the world again. 9.79* is new film from Daniel GORDON who is already known for a series of documentaries about North Korea, The Game of Their Lives, A State of Mind and Crossing the Line in South Korea. Capitalizing on his know-how of how to get to hard-to-reach persons and draw stories from them as a veteran producer of sports programs, he re-enacts the track event at the Olympics and brings eight legendary sprinters of the last century to the screen. He re-creates the incident that happened 25 years ago vividly through their current situation. By using conventional music from the thriller genre, it makes the audience feel their stomachs knot up at the moments when all the facts of the incident are ferreted out. The film with its absorbing story makes another dramatic reverse at then end, and then, it is wrapped up with a bitter conspiracy. However, the incident in 1988 is just the tip of an iceberg. We know this problem grows massively and exists in the sporting world we love wildly. The last interviews of people still working in the sports industry from the ending credits remind us of a certain coach’s detention that was in the news lately. Too many things are involved and intertwined in the world. That is why we probably need time to face ourselves more than ever. (LEE Seung-min)