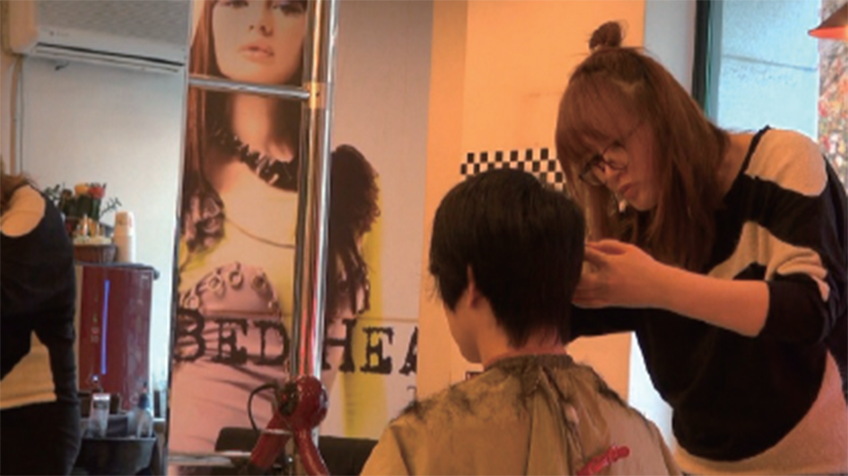 A daughter stubbornly throws questions to her mother who runs a hair salon. She thinks her mother’s way of thinking is incomprehensible. From where the daughter stands, her mother is too soft to the visitors’ demands. Her mother doesn’t seem to have a business mind at all. The Mother cuts the daughter’s friends’ hair for free and accepts it too easily when the customers try to make a bargain. But the mother says that it’s her way of living, so don’t bother. The daughter keeps pushing her mother that she is too complacent without a backup plan for living in the future. On the one hand, this quarrel between the mother and the daughter is everything of this film, and so the content may seem limited. Also, the editing seems to be a cut and paste job here and there for a couple of days’ worth of shooting. However, this film contains a rare flow and tension, as well as wit and balance for sure. These aspects don’t only exist, but they are superbly combined. Especially its calm and heavy resonance in the ending scene is impressive. I could empathize with what the mother and her daughter is feeling, and also sense something beyond that. How you feel about something is subjective. Thus, I doubt that what I feel can be felt by others as I do. Nevertheless feeling is the core of artistic value we can’t abandon. Where does the value of documentary films come from? Does it come from capturing a moderate issue, great shooting, smooth scene changes and professional interviews? As anyone can know, it doesn’t. Although we are aware of that, we are always obsessed with those unessential things. People try to score the work based on them. Why? Because they are the most objective standards. The objectivity is a trap of the art. I hope that the director of this film will not lose her own feeling and straightness. I hope that she will persistently ask and seek and ‘discover’ during the journey. American film director John CASSAVETES once said “What we’re seeking is searching for something. Is there any reason to produce a film about what I already understood?” (AHN Seul-ki)