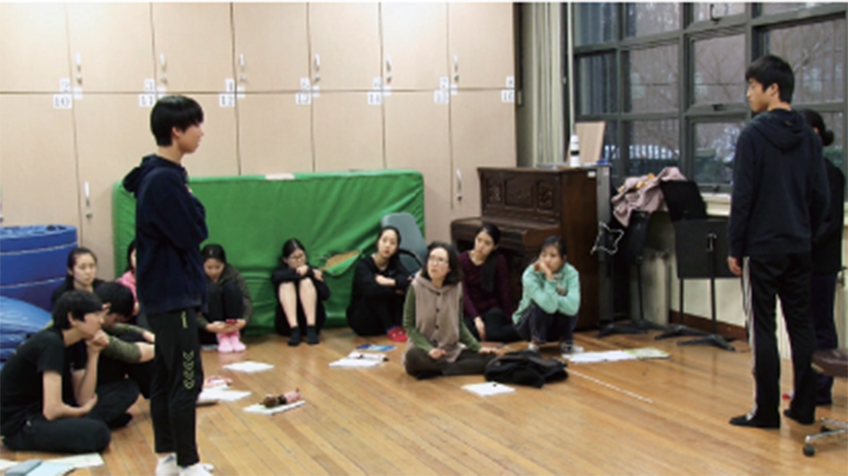 Some regular high school students and grown-ups have a prejudice against arts high school students. Arts high school students, however, counter argue that they are not punks enjoying parties all the time. They insist that they are the same as other teenagers; suffering from college entrance exams and maintaining their grades, which may define their future career. However, once you watch this film, you may say that they are just complaining. I want to say “But you guys have the environment for planning and making a film like this!” I say this because it is a well-made film. The reason to pay attention to this film is not its theme. The subject of this film is kind of limited; it talks about certain arts high school students’ worry and passion. But their sophisticated way to make the audience sympathize with the students is surprising. There are tensions between cuts and scenes, and it is well organized and effective as if watching a film drama. Inputting students’ own acting in some scenes is impressively used in the film. The flow of the interviews with regular high school students, teachers and students in arts high schools runs smoothly. Cinematography is also great. It is easy to say that this film is made by experienced students who have made many videos including film dramas. But technical excellence is not everything of this film. Watching this film makes me smile and feel pleasant. One reason the film brings sympathy, is its stance, which is identical with what the students have. I believe that this rhythmical and balanced film was made when these young directors’ confidence, composure and humility met their talent. Is it too much to say this film feels like a friend who is kind, sincere and competent? Whatever it is, I feel proud. (AHN Seul-ki)