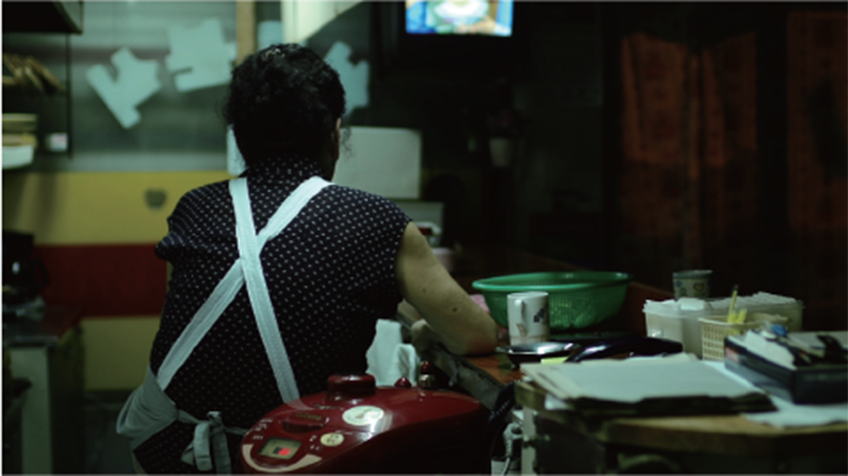 There are three old ladies, one running a snack bar, another who loves to paint, and another is a housewife. They had survived in Kijichon, The U.S. military Camp Town as a “Yangsaksi” or “Yankee whore”, who are prostitutes working for members of the U.S. military. The lm follows the three ladies’ daily lives as they have meals, collect wastepaper, do laundry and so on, and they superimpose their life histories on their images. Each independent episode of the three old ladies connects to each other, mixing space and time, reality and ction with odd stream and rhythm as the lm progresses. The serene statements from Ms. PARK Myo-yeon of a snack bar is connected to the furious murmurings from Ms. PARK In-soon, who wanders the street collecting wastepaper. It continues to the virtual narration of Ms. AHN Sung-ja who is half-black, half-Korean. Her narration brings up past memories and oats in the ruined space, and nally meets the lives of Myo-yeon and In-soon. At that point, the camera that was just staring calmly before starts to oat in the space of the lm little by little, and it is not strange at all when the three old ladies, each character of each independent episode, appear and run into each other in the same screen. It even seems natural. Especially when Sung-ja, wandering in her memory, comes into the scene when Insoon paints at the park, or when Sung-ja recalls an abandoned kid in Myo-yeon’s memory, when Sung-ja comes into Myo-yeon’s snack bar. The reality, memories and many years of time get tangled and come together as a whole. It is a kind of cinematic history writing to capture disappearing memories in disappearing space. The directors, KIM Dong-ryung and PARK Kyoung-tae have worked with the women in Kijichon for over 10 years. They try to capture Kijichon and the people there through Tour of Duty again. This time, they focus on the location, Kijichon, where the survivors were rejected and wandered, as much as the stories of the people that are disappearing. They name it - ‘The land of spiders’ For many years, both directors have worked as an activist and documentary lm director in Kijichon with the people there who had worked like an ant and have disappeared like a spider. They use their elaboration which has been accumulated while both directors have worked there. They outstandingly restore and recreate a part of eliminated or forgotten modern Korean history and connect it to the present, tracing their memories about the location, Kijichon where it used to be gigantic. (LEE Seung-min)