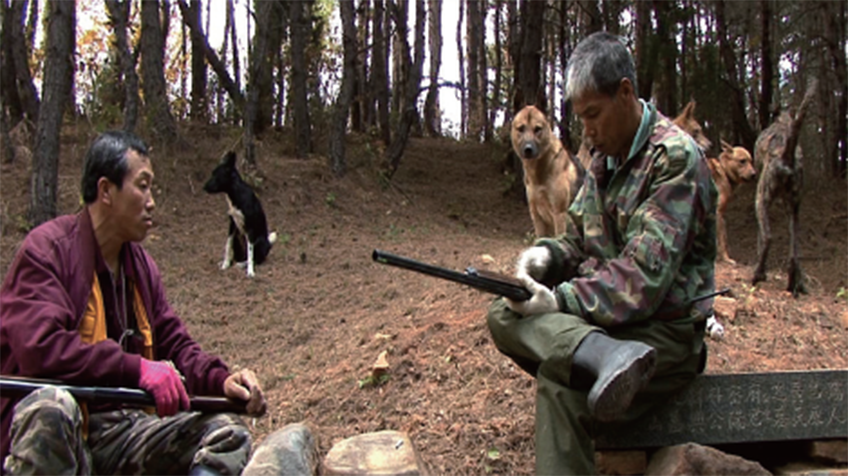 The main characters of The Hunt are three hunters who start a hunt around Uiryeong County in Gyeongsangnam-do during the legal hunting period of harmful birds and wild animals. What a dynamic experience to see the hunter’s hunt! We could expect something very spectacular, but the reality is that their hunting is unexpectedly quiet. After calming your pounding heart due to a few gunshot sounds, the hunters mostly follow the traces of elks, wild pigs near elds and mountains, or they just catch pheasants sitting on the roadside. Comparing with provocative news that report wild animals coming down to the farming houses and dig up the crops to search for food, or attack the convenience store in the city, their hunting looks even dull. However, when the sound of gunshot is not surprising to the audience anymore, we are able to see other things. Bare ridges that can’t be called a forest anymore because trees are cut down indiscriminately, the traces of animal tracks but no sign of them anywhere, a TV variety show that makes a great fuss about hunting down wild pigs. Meanwhile, the governor takes credit to himself that he brings many hunters for the residents. The Ministry of Environment gives immense target numbers of hunting, even when they never come to research on the real condition. However, the hunters who actually hunt these animals speak out their mind that they cannot exterminate the animals. In fact, the damages of farms by wild animals are not something that started just recently. It has become a terrible social issue in the last 10 years. People say that this situation is because of the excess increase in the number of wild animals, and the only answer to reduce the population is through the hunting. The Hunt asks a question. Is hunting really the only answer? The answer is told through the main characters, and also in the nal scenes where the hunters come down from the mountain hollowly, seeing the site of deforestation. (HUH Kyoung)