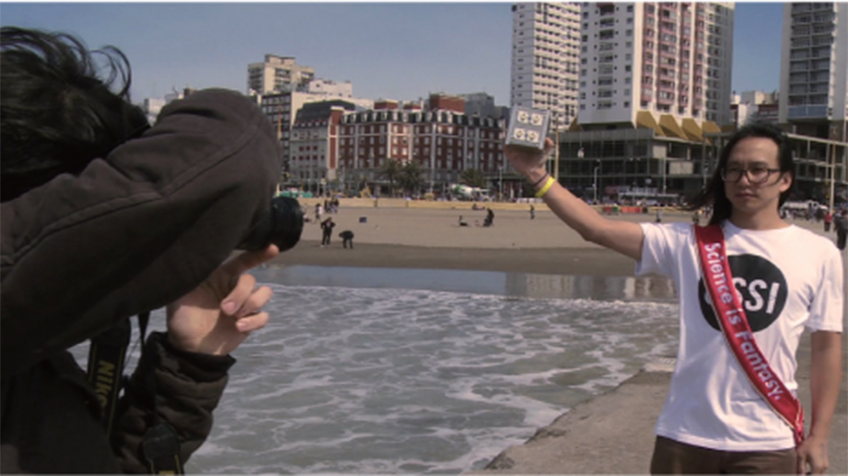 OSSI (Open Source Satellite Initiative) means, in simple language, that you try to launch your own satellite into space through open satellite manufacturing technology. Media artist, SONG Ho-jun is busy fullling his absurd plan, and the camera follows his preposterous project with affectionate eyes. The Basement Satellite is a documentary lm about the personal satellite launching project by SONG Ho-jun who is called a freak, a nutcase and a dreamer. But as the lm progresses, you cannot be sure whether the main character is SONG’s dream or the process of a personal satellite launch, or a cute confession of love toward an escapade. In the beginning, it seems to start seriously with the footages of news and newspapers of SONG. But as it shows the details of his plan little by little, it gets confusing more and more whether it is science or a performance art. When he considers the situation of the satellite’s explosion using various technical terms, he looks innitely serious. But watching him who signs a contract with a French company for its rst satellite launch, then later raises one hundred million KRW for the production cost by selling ten thousands T-shirts, we just couldn’t help but smile at the rush of a clueless optimist. If the lm has come this far, it drives the audiences who have followed the development of the story to ask a question. Why should he launch the satellite to space in the rst place? The Basement Satellite takes the form of the in-depth reporting of SONG Ho-jun thoroughly. The director might have wanted to capture a dreamer’s back breaking for his dream instead of telling a melodramatic story of a man. To ask him why he wants to launch the satellite is the same as asking people why they would climb a mountain. It is just the territory of justied act for him and his blind passion is transmitted to the audiences before they know it. Does the dream come true? Actually, it is not that important. His pure selsh purpose, the challenge for the challenge without any desire through his goal. The uselessness is lovely and every step of his adventure is fun. (SONG Kyung-won)