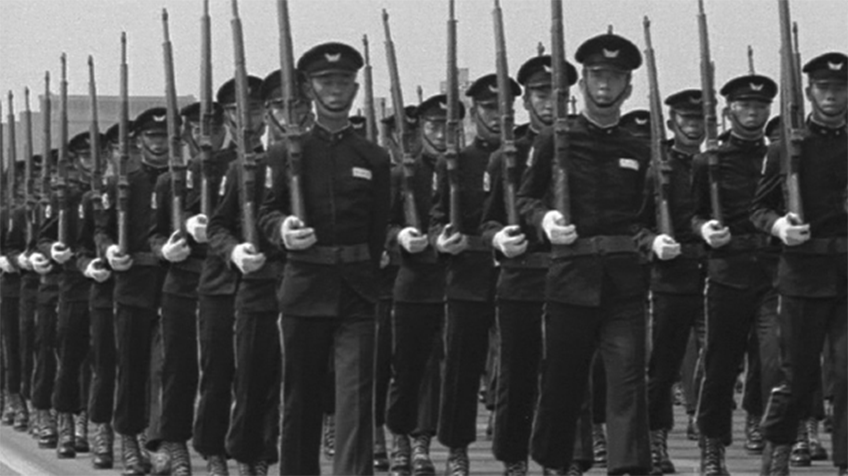 Since the early 2000, Kim Kyungman has remained purportedly the only Korean independent filmmaker who has fully been devoted to the topics and methods of compilation film. By investigating newsreels as well as propaganda and educational films from official archives in Korea, and creating evocative juxtapositions of their images, Kim’s films invite viewers to be confronted with an array of political and ideological tensions that have pervaded over the history of modernization in post-war Korea, which encompass the military dictatorship of president Cheon Doo-hwan in the 1980s (Long Live His Majesty, 2002) and Korea’s deep-seated dependence upon the culture and politics of the United States from the post-liberation to the neoliberal era (An Escalator in the World-Order, 2011). Kim’s new short film, Beep, brings together sections from a number of newsreels related to the 1968 death of Lee Seung-bok, a Korean young boy who was murdered by North Korean commandos for his now famous line, “I hate communists.” The newsreels, spanning from the late 1960s to the 1980s but reedited by Kim in non-chronological order, unveil the ways in which the Korean governments of the past used Lee’s death to propagandize their anti-communist ideology in different ways, such as building Lee’s memorial hall, producing an education film based on the reenactment of the incident, and holding a series of events including anti-communist rallies. Kim’s editing strategy here is to create a deliberate disjunction between this non-chronological assemblage of the archival footage and the film’s soundtrack, which is taken from Anti-communist Boy Lee Seung-bok, an audiovisual text produced by the Ministry of Culture and Education, which consists of slide films and a cassette tape. Since the soundtrack narrates the chronology of Lee’s death with beep sounds at a regular interval (which is derived from the technological foundation of slide projection) it creates a consistent mismatch with the temporally disparate images, while at the same time highlighting the totalitarian and violent overtone shared by the images’ subjects. By invoking slide projection as a medium that is now perceived as obsolete, and connecting it to the newsreels and propaganda films as representing the public media of the past, Kim brings his techniques of associative editing and sound-image disjunction to a new recognition that the history of media technologies is seen as inseparable from that of the ideological purposes imposed upon them. (KIM Jihoon)