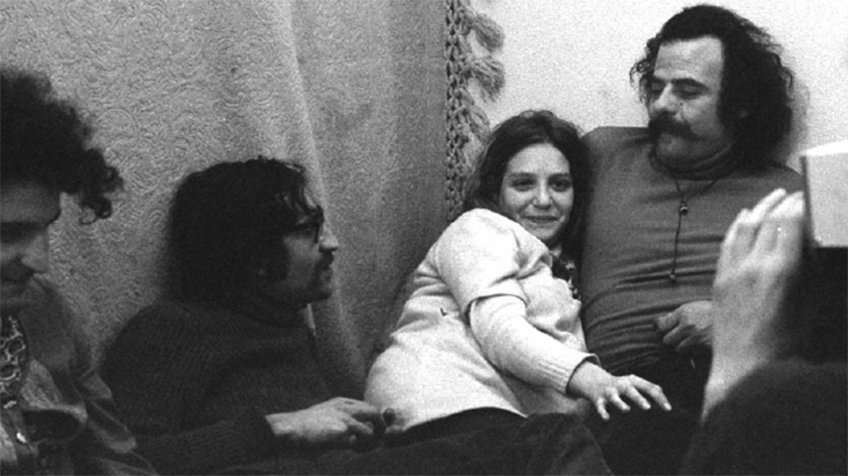 One day of February, 1972, an actor Massimo Sarchielli encounters a girl named Anna at a cafe in Piazza Navona in Rome. She is 16, 8 months pregnant, and homeless, escaping from a shelter and wandering on the street. Bring her to his apartment and taking care of her, he suggests to his friend Alberto Grifi making a film about her with him. Grifi is drawing the Italian experimental film community’s attention with a found footage film, La Verifica Incerta (1964) and decides to make a documentary of her using the video technology which has been in experiment for its aesthetic capabilities at that time. Anna is launched like that It’s the first Italian film shot with a video recorder in the open-reel way, which is converted to 16mm through the equipment of Vidigrafo, Grifi’s invention, and a masterpiece succeeding to the heritages of Direct Cinema and Cinéma Vérité and driving them to their limits at the same time.

They make the introduction of Anna with reenacting the moment Sarchielli encounters Anna for the first time at a cafe in Navona. The film unfolds between his apartment she gets to stay at andNavona. In the apartment, they record Anna’s every single action with callous obstinacy (as in Andy Warhol’s) by the help of the terrific recording medium of video - especially, the infamous scene where Sarchielli stares at lousy Anna in shower is so nakedly recorded as to feel sultry. On the other hand, in Navona, they shows several sights reflecting the circumstances of Italy in those days like interviews with those hanging around there, their arguments about socio-political issues or Anna, and an assembly of a feminist group claiming the housewives’ rights. Though often compared with Jean Rouch and Edgar Morin’s Chronique d’un été (1961) preceding May 68 events in France(Mai 68) and Chris Marker’s Le joli mai (1963) because it captures(or foresees?) the air of the movement of 1977 in Italy, Anna’s ‘political aesthetics’ would be right to be considered to resonate and drift among Warhol’s Blue Movie (1969) - showing Viva and Louis Waldon’s conversations from athlete’s foot and gonorrhoea to Vietnam War and their sex and shower -, Kazuo Hara’s Extreme Private Eros: Love Song (1974), and Robert Kramer and John Douglas’ Milestones (1975), a anthropological report by American communists in 60’s and 70’s. Anna is oriented toward the microscopic research of documentary for the practice of everyday life including ‘hyper private’ part to rediscover possibilities of politics, but it’s inflected by bursting happenings (a staff called Vincenzo suddenly comes into the frame confessing his affection for Anna and blocked by Anna’s rejection (against shooting the childbirth). Though the film is anti-institutional in the way of production and the topic - it persistently follows those who go against the institution (Anna and the guys in Navona), the conditions that Grifi and Sarchielli put Anna in camera -Sarchielli’s apartment, video able to shoot for a long time with, reenactments as structural element indivisible from factual documents - already function as another institution itself, indeed. It might not be expected by the directors, the inflection and interruption by Vincenzo and Anna, however, are human resistance against inevitable institutions attended with film production, and become truly singular points corresponding to thepolitical configuration of Italy in 70’s. More simply, Anna is the film who reveals resistance with its failure. As the novelist Rachel Kushner said in Artforum, the character Anna can be read as “a symptom of the shift in the composition of the Italian Left, from the material conditions of the working class to a world of hippies, students, precarious workers, drug addicts, and other emarginati” in 70’s.

Anna was invited to Berlin International Film Festival in 1975 and screened at Cannes and at Venice, too, in the next year. Nobody knows why, but it has been a hidden legend recognizable only to some of the Italian film community and even a forgotten out of Italy for about 40 years (it didn’t draw attention until its digital restoration version has got screened at Venice, 2011 and at Rotherham, 2012). This is not the only misfortune of the film. Grifi and Sarchielli broke up with each other because of troubles about credit things - people regarded the film totally Grifi’s work. Also, having got away from Vincenzo with the baby left with him, Anna turned out to be put into an asylum and nobody knows her after story. Vincenzo was killed getting involved in a fight. The two directors passed away before this film has come to light again (Grifi died in 2007 and Sarchielli, 2010). Just like a vampire, Anna got its life by depriving the people related to it of theirs, slept in the dark for a long time, and has woken up and shown up in front of you. (YOO Un-seong)