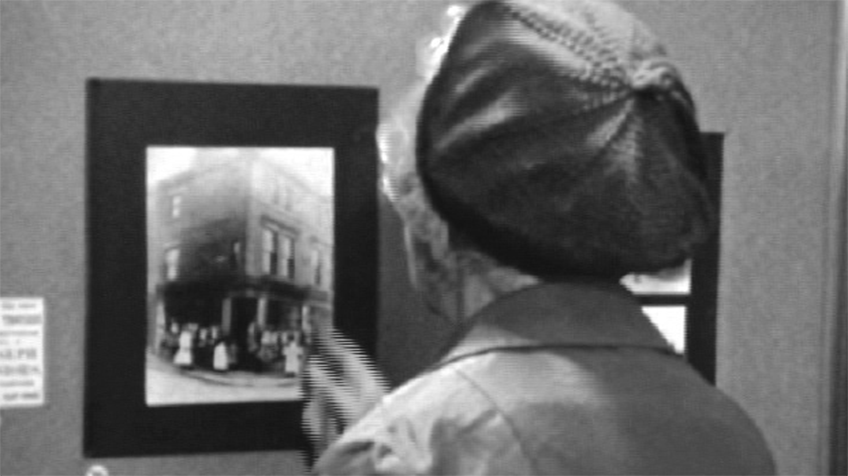 For Memory in Marc Karlin’s own words in conversation with historian,

(For Memory is a contemplation on cultural amnesia, carrying the themes and motifs that would recur in Karlin’s eleven subsequent documentaries. Ironically, a film about TV and Memory was forgotten. It remained neglected until the BBC broadcast the film in an afternoon slot in March 1986.)

“For Memory. I started writing it 1975 and shot it between ‘77 and ‘78. It was done as a co-production between the British Film Institute and the BBC, because Gavin Barry, a really good filmmaker, wanted me to make a film independently and for the BBC. This was unknown at the time, but somehow we got through it. In 1982 For Memory was the first independent film to be shown on the BBC. It created a great clamour, but after For Memory had appeared it was to become more common for independent filmmakers to get their work on TV.

For Memory is about memory and history, because I don’t have a history and I have a very bad memory. It was occasioned by Holocaust, that stupid Hollywood series that had such a huge effect. The question the film asks is: how could a documentary photograph die so soon - it was then only about thirty years - and be taken over by a fiction? The fictionalisation was so vulgar and so horrible.

I built an imaginary city in a studio, which now looks like Docklands, but at the time I didn’t know that of course. I just got architects’ models and started literally building a city. I made a camera to move around it, and tried to imagine how the city remembers and forgets. It is not simply that modern cities are amnesiac, because history is all around. As the film says, a citizen can forget, but if there is danger of too much forgetting he can be pulled by a leash, by a television play, Henry V, or whatever it might be. But this is a very specific relationship to history. So it was an essay on a city that forgets and remembers, and how it forgets and how it remembers. The third part was about those who are not allowed in the city with their memories - the socialists. They are outside the city’s bounds, and their memories have not yet been incorporated.

One episode was about a historian, Cliff Williams, who collected miner’s tool and photographs of the mine at Clay Cross. When he held this exhibition there, you see all the old miners coming back to touch their tools. The second episode was the historian E.P Thompson at Burford, giving a lecture on the Levellers, who were shot there in the seventeenth century for refusing to fight in Ireland, and the third was Charlie Goodman, an anti-fascist fighter at Cable Street, East London. Charlie made this wonderful mural there, and he guides us through it in the film. So For Memory was about trying to get those histories recognized: the Levellers, the Clay Cross miners, the Battle of Cable Street and so on.

After the part on the city, the film starts off in the hospital with people with Alzheimer’s disease. There was a photographic project, to give them things to touch, photographs to help them remember and so on. You realise the ruin of memory is so easy: these people were active, and suddenly they cannot remember what happened the last second. They have a long-term memory, but they had no language to capture; they jumble up the words all the time. The fragility is unbelievable, fragile ruins.”