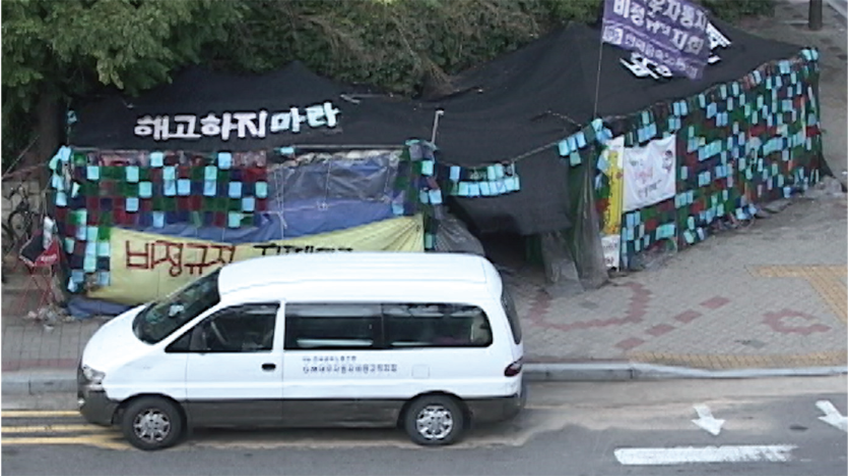 As a producer of documentary films, I have naturally come in contact – both direct and indirect – with the realities of Korea’s labor market. Outraged by the unfair treatment of temporary employees – unstable work conditions, discrimination of wages, and subcontracting system – I have shouted the slogan “Stop illegal dispatching. Provide permanent employment!” I Need You directed by KIM Su-mok has made me realize that I have so far only considered their issues on a superficial level, and that my cries borne out of a sense of righteousness are empty. By recording the long-term struggle of temporary employees of GM Daewoo, the film gives me some specific reasons why we should stand on their side. The film focuses mainly on the establishment of temporary workers’ union and their fight for reinstatement. We witness how these previously submissive workers become conscious of their status as laborers and stand on the forefront of the battle to claim their rights. What is also apparent is the tyranny and violence of permanent workers who, even though they all do the same work on the same line, brand their co-workers with the word “temporary” in scarlet letters and discriminate against them. Furthermore, GM Daewoo puts forward an absurd argument that their contracts are “legal”. Through the camera that closely follows the longterm struggle of the temporary workers, we experience their anguished life. They are frequently dismissed and then reinstated only after putting up a fight. Even when they are finally allowed to get back to work, they are ostracized and treated inhumanly. Instead of high-flown ideas, the film conveys what could be found near us in everyday life. Because of this, we realize that the issues discussed in the film are related to daily events around us. What the film shows are not just some faraway problems. The union members for a long time risk their lives to continue their high altitude demonstrations. Although they are the principal agents of the struggle, they are not recognized as such because they are temporary employees. We learn a lot from the way they agonize over the company’s deceptive reinstatement regulations based on the subcontracting system. The film helps us reach a new understanding of social irregularities. The warm yet subjective gaze of the camera reflects the way the director gives them his support and yet refrains from making rash judgments. As a viewer, I could feel the air and the energy of their life as if they are my own. Furthermore, I have come to make a promise of solidarity for these workers living not far from me. “Stop illegal dispatching. Provide permanent employment!” It is time we took some action together for all our sake, and I Need You proves the reason why. It is a must-see film. I highly recommend it. (MUN Jeong-hyun)