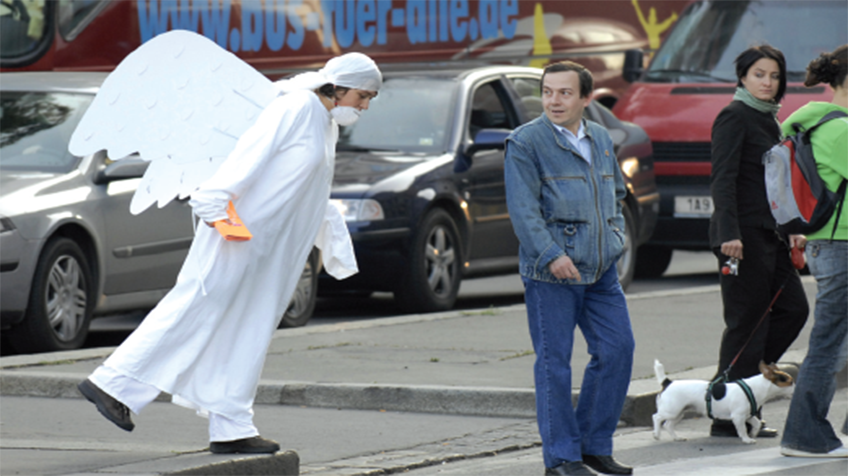 Auto*Mate is a cultural & social project that promotes activities to make Prague healthier and more lively. Prague, known as “the mother of cities”, is also “the city of cars.” As the director feels frustrated about the city’s reality—too many cars, too little parking spaces—he conceives the idea of starting a car-free Prague initiative. Auto*Mate is a city-awakening initiative as well as a playfully provoking instrument. In the course of six years, there have been a number of happenings, meetings with politicians, group bike-rides, specialized seminars, exhibitions, polemic debates, etc. Despite the primary negative attitude of the politicians, the Auto*Mate succeeds in organizing Prague’s first “Car-less Day”. As a part of the Auto*Mate project, Marecek turns his own car into a dialogue-vehicle—an interactive mobile board where city folks can put their messages. The messages vary, from funny ones to aggressive ones. The film tracks the development of the Auto*Mate initiative, while capturing dialogues with various protagonists. It is also interesting to witness the change the filmmaker himself goes through, as he slowly turns from a film director into a civilian activist, an artistic radical, a political lobbyist. Auto*Mate isn’t a simple, transparent criticism. It attempts to reveal the causes in people’s ideas about the purpose and place of humankind on Earth. It is a film examining and creating connections, inviting to political and personal responsibility and well-known alternatives.