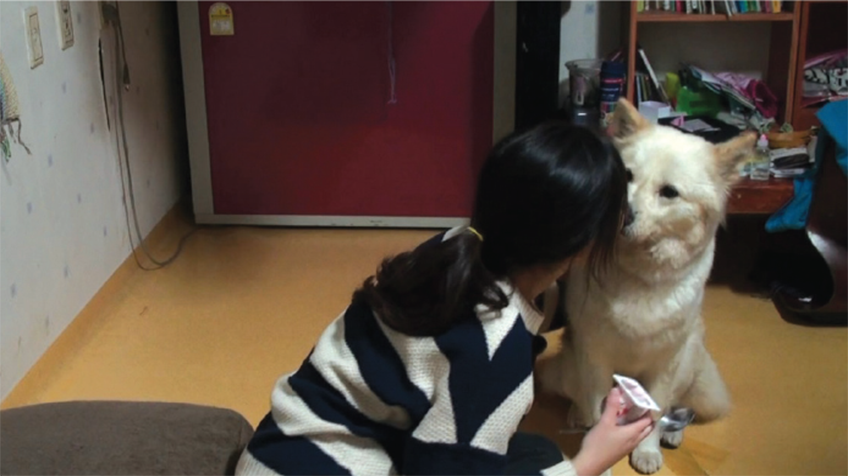 Hat-nim, meaning “sunshine,” is the director’s dog. Living together now for five years, Hat-nim has been the best friend of the director and a cure for her depressed mother.

One day, the dog gets out of the house and bit a neighbor kid to end up being sent to a shelter for abandoned dogs. Worrying about her dog’s settling down in the shelter, the director simultaneously realizes how she herself is exposed to a new environment, as Hat-nim is. Beginning a new chapter of life as an adult at work, not a student at school, the director undergoes unfamiliarity, frustration and a sense of inferiority. Running less than 20 minutes, not until the mid-part, does this documentary show what Hat-nim means to the director and to her own situations. We can assume that it took a long time and courage to turn the camera from Hat-nim to the director herself, who recently quit her job, and confess that she is afraid what to do the next day. Hat-nim is a companion dog, but at the same time the dog means the reality the director has to face up and eventually overcome. My Sunshine calmly presents the personal story by juxtaposing Hat-nim and the director herself. What brightens this documentary is the director’s courage and candor that are first hidden behind the reserved tone but will soon reveal themselves as the story proceeds. (PARK Hye-mi)