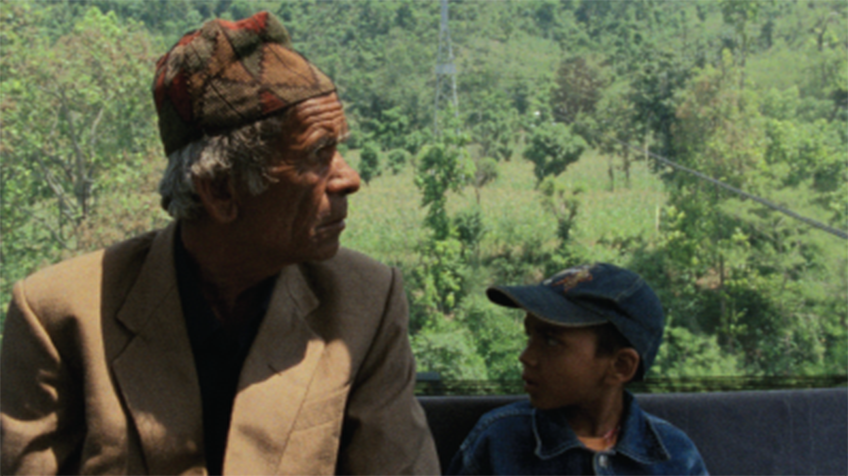 Shot on Super 16mm film from a fixed vantage point inside a cable car, Manakamana consists of a series of 11 single shots. Each lasts roughly ten minutes, corresponding to the time that elapses during a one-way trip up to Manakamana and to the length of a 400ft magazine of 16mm film. With every sequence, we are introduced to devoted pilgrims and their offerings as their make their trip up to the temple and down from it. Manakamana is the sacred place of the Hindu Goddess Bhagwati who is believed to have the power to grant wishes (Mana” means heart; “Kamana” means wish). The seamless editing brings all 11 shots together - some of which face the temple while others turn their backs on it – making the film appear as if it was shot in one go in its entirety. In this sense, the film follows the tradition of Andy Warhol’s Screen Tests visually and James Benning’s Twenty Cigarettes in terms of its time structure. The film’s formal consistency, coupled with the wonder of facial landscapes, extends into a sense of suspense resulting from the modification of forms tamed by temporal repetitions. The film was produced by Lucien Castaing-Taylor, director of Leviathan. He is also the head of the Sensory Ethnography Lab at Harvard, which is known for producing the most experimental documentaries in the US, in the spirit of the master filmmaker Robert Gardner. This seemingly simple documentary challenges us to participate with our sense.

For example, in the surrealistic shot feature two women dressed in traditional clothes eating ice-cream, we are led to discover and experience for ourselves a time of ‘transport’ that moves towards a reflection on human desires as well as issues surrounding Nepal’s class system and information on the Nepalese people. Such heuristic moments with semiautomatic artificiality of a record move audiences, and ultimately allow us to call Manakamana a ‘transport’ (on two levels) film rather than a CCTV one. (KIM Kwang-hee)