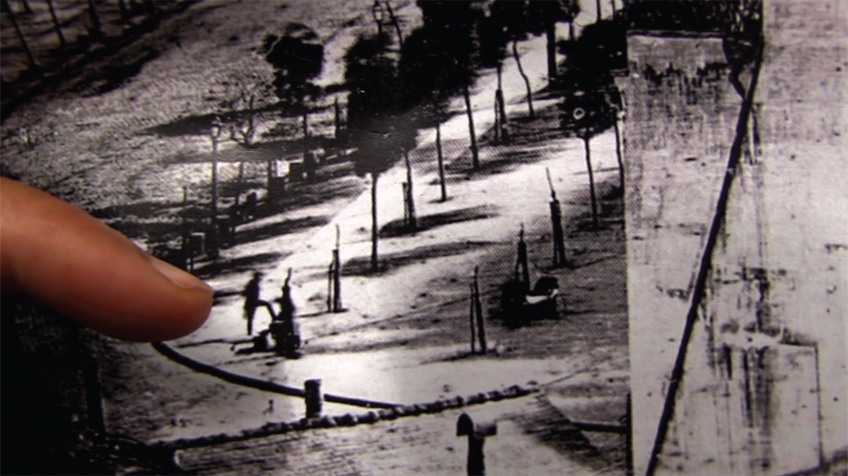 and the image gazes back

In the morning winter of 2014, an image comes to mind while I walk along the Amstel River. It happens while I shiver in the cold breeze from the north European wind and the rusted train tracks that crosses through Amsterdam. Eventually arriving at Rijksmuseum, I contemplated about this image until the museum doors open. Although fuzzy, this striking image seems like it will be in one of the museum’s exhibition rooms. Following the mazelike corridor and going in and out of the numerous exhibition halls, a finger points to a blurry person in a picture that was taken either in Paris either in 1838 or 1839. You hear the narration from the videographer Belit SAGˆ - “the fact associated with the image starts here.” By mentioning the American journalist James FOLEY who was beheaded by ISIS, SAGˆ begins to compare Foley’s execution footage with the last scene from the 1995 American film Seven. He alternately shows the color, angle, and shadowed images from the execution image and film image of the yellow desert background, orange jumpsuit, black garb, camera’s angle and commanding the shadowed person. Then SAGˆ returns to the first image the finger is pointing. The videographer is trying to restore the subjects who either escaped from the captured image or hid among the multiple layers.

My reaction to the black room is that the image is merely a ‘time-image’ and not about the philosophical reason of life and death. It seems SA Gˆ is memorized by a unique technique of collecting unrelated or coincidental pictures, objects, print media, and online materials to bring out the traces of the past and summon memories of the future. Perhaps, the cold morning breeze from the north European wind and the rusted train tracks invoked the future memories of me visiting this city. However, I knew this was my first time visiting Amsterdam, and I was going to meeting someone soon.

Upon showing a picture of the citizens of Burkina Faso invading a broadcasting company instead of the parliament, the videographer asks another question, “What images have you preserved so far? This picture reminds you of the poet Mircea DINESCU who stormed into a state-run TV station with fellow revolutionists during the Romanian Revolution to declare the tyrant fled on live TV in 1989. The people’s gestures, expressions, poses that were captured on camera were actually a reproduction of Burkina Faso’s revolution. History had been remembered as images and those images have been rearranged as reconstructed fragmented stories. The TV footage of Burkina Faso’s Revolution broadcasted on October 31, 2014 does not have any meaning or instructions, but it is only about their life and death because reality is an extreme physical existence that shows the event itself. This 10 minute single video work which consists of Burkina Faso and Romania; American film Dog Day Afternoon and bank robbery in Brooklyn, New York in August 1972; the 23rd of Februray, 1981 Spanish coup d’état and French comedy the Pink Panther series analyzes the allegorical significance, physical existence, and symbol system as well as explores how knowledge and power is forged by the visibility and reproduction of images through secret exchanges between reality and fiction. SAGˆ brings attention to the social political discussion by reorganizing the surplus images and language. Passing the exit of the labyrinth and following the rusted train tracks, I end up at a studio of an Armenian artist who lives in Amsterdam. We talk about SAGˆ’s work while sitting around a table placed in front of large crisscrossed windows. Due to the sunset shining into the windows, the space in the studio had a peculiar shadow, and suddenly I felt as though I was an immigrant. Then I recollected SAGˆ’s last question of “How much is the interpretation and reproduction of this world similar to that of Hollywood film aesthetics?” The videographer knows that the ISIS execution was not a reproduction of a scene from a Hollywood film. Then how many more images of James FOLEY and Daniel PEARL are possible? The Armenian artist mentions the dormant unconsciousness and says he has a unique technique of conjuring the memory of W.G. SEBALD’s writings. In the second story All'estero of his novel Schwidel, Gefühle, where the author says: “I sat at a table near the open terrace door, my papers and notes spread out around me, drawing connections between events that lay far apart but which seemed to me to be of the same order.” Just like SEBALD describes in his novel how he writes new memories through pictures he does not remember, other people’s recollections, and literature, SAGˆ collects the images of objects or subjects, segments them, and adds blanks to rearrange a part of whole or whole of a part. While waiting for the last train out of this city, I scrutinize at the postcard I received from Rijksmuseum, and it was none other than a still picture of the exhibition map. (JEON Sung-kwon)