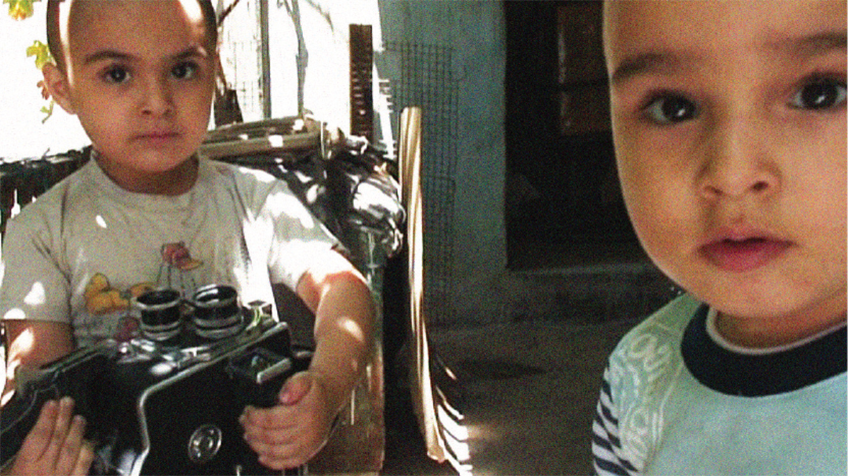 The circus, not unlike the cinema, is a potential place of dreams. All it takes is a small tent pitched up on a ragged empty lot, and an escape from the everyday is possible. It is a shelter from reality, offering excitement and spectacle. Yet, dreams are prone to turn into nightmares and there is a seedy undercurrent underneath the shiny, smiley surface–one of terror and darkness, of danger, fear, and death; one in which spectacle turns into horror. In La Dolce Siria, Syrian filmmaker and conceptual artist Ammar AL-BEIK uses this dichotomy in a stunning indictment of the Syrian regime’s war against its own people. The film essay is a follow-up to AL-BEIK’s 2011 award-winning short The Sun’s Incubator. Then, the birth of his daughter served as a foil upon which to negotiate the hopes and utopias of what has since entered the historical narrative as the so-called Arab Spring. The Sun’s Incubator shows the filmmaker’s young family surrounded by then current images and sounds of protest and struggle against the Mubarak and Assad regimes in Egypt and Syria, emanating from the TV and seeping in through the open windows of their apartment. Home video footage of the birth becomes a chiffre for a brighter future, while the bloody newborn body functions as an allusion to the price of freedom that many of those on the street will have to pay. Yet, there is genuine hope in the air when by the end, AL-BEIK straps his infant daughter to his chest before leaving his home, heading to join, as we are made to believe, the protestors on the street. Three years later, many hopes have been dampened, if not crushed, in many parts of the Arab speaking world. In Syria, the Assad regime has pushed the country into an ongoing civil war. This is the status quo as AL-BEIK takes up the thread of his story again, this time giving his film a decidedly more fantastic spin in the face of facts that seem too horrifying to grasp head on.

Disappointment and disbelief take the place of optimism: faces looking on in astonishment and voices expressing their stunned, horrified disgust traverse the film, as the filmmaker tries to trace the recent history of his home country through his personal story–which at the time of this writing has led him to Germany, where he was granted Asylum in early 2015.

AL-BEIK’s cinema is as much fueled by his own personal life as it is by his life as a cineast–a life lived through other people in the cinematic imaginary. And it is these two poles of his existence that he is pitting against each other in La Dolce Siria. The film is the artist’s attempt to reconcile his faith in cinema as an art form, sanctuary, and weapon, with a situation in which the most grotesque imaginations–cinematic or otherwise–have proven to be less terrifying than what reality has turned into. The film’s multi-layered structure, feeding off of found, rediscovered and appropriated images, is a function of it’s coming into being as a film made in transit, a piece of “cinema on the run“.

In its amalgamation of images scraped from various sources–the filmmakers own archive, the internet, cinema history, television, and installation art–the film connects disparate imaginations through a series of formal and visual juxtapositions. In the process, documentary and fiction become intermingled and impossible to tell apart and the claim to truth of the vast pool of images of struggle and war produced and re-produced daily is called into question.

Scenes taken from a documentary on Federico FELLINI's infatuation with the circus give the film it’s basic structure and cinematic footing–the film’s title a bitter reference to the Italian director’s lush depiction of Rome’s high society in the 1960s. But rather than its cinephile system of reference, it is the contemporary and historical documentary footage from Syria that stays with the viewer long after the film is over: the Italian State circus in Damascus; shaky mobile phone videos of soldiers dropping makeshift bombs on a Syrian city from a helicopter; the only Syrian cosmonaut in history talking to former president Hafiz AL-ASSAD from a Soviet space station in 1987; Russian built SCUD rockets piercing the sky above Damascus; two children playing on a balcony, trying to figure out the workings of a Bolex 16mm film camera, rockets being heard in the background: Despite his age–he cannot be older than 2–one of the boys identifies the sound by name: ”SCUD!” War is all he knows. Amid the devastation and hopelessness remains, however, a glimmer of defiance: Enter, Abu Taha, a somewhat iconic hero of the Syrian revolution, proudly relating his claim to fame: Publicly defacing a torn down statue of Hafez AL-ASSAD–by peeing on it.

FELLINI would have liked him. (Ulrich ZIEMONS)