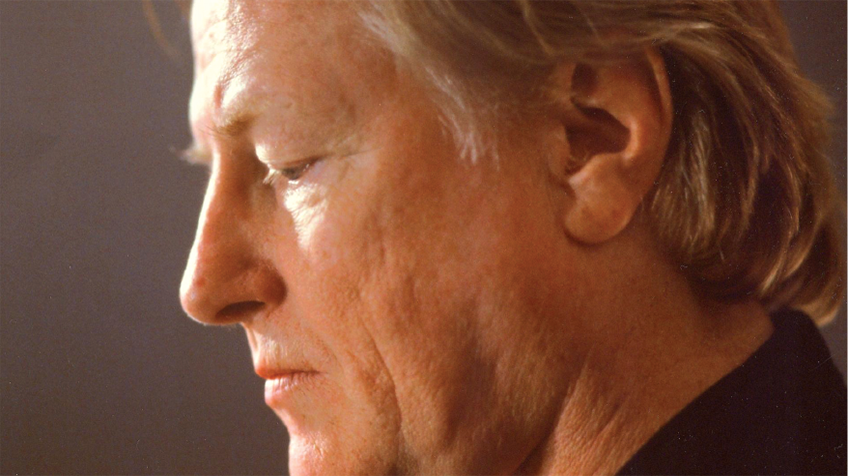 Romuald KARMAKAR deserves to be called as the most uncompromising figure in among contemporary German filmmakers. With works that cannot be easily categorized, he captivated the eyes of sensitive viewers while causing fierce debates on his practice. Considered the most audacious among his films along with Hamburg Lectures (2006), The Himmler Project (2000), an extreme ‘film of a speech,’ can be regarded as a work that thoroughly shows the essence of KARMAKAR’s practice. The subject KARMAKAR takes in The Himmler Project is a notorious speech by an SS leader Heinrich HIMMLER, which took place on October 4, 1943, in Pozen, Poland. The speech was given before 92 SS officers and mentioned a plan to exterminate the Jewish people. (Although the speech was secretly made, a recording of the whole speech was made and remains until today.) The idea of the film is simple: an actor (Manfred ZAPATKA) reads out the whole transcript of HIMMLER’s speech in a set where there is a platform in front of a backdrop in a single color. (The running time of the film, which is about three hours, is almost identical to the actual duration of HIMMLER’s speech.) Indeed, ZAPATKA seems to be standing in front of the camera as an actor who is ‘performing’ (although it is done in a very exceptional way) – he is not playing the character of Himmler – rather than ‘reading.’ Although there are intermittent changes of shots, the camera focuses on capturing the face of the actor on an eye level while hereads the speech. Then, the film emphasizes different attempts to comprehend and reconstruct the context of the speech through audiovisual analysis of the recording, not merely presenting a reenactment of the speech: the reaction (i.e. laughter) of HIMMLER’s audience is presented on the screen in the form of a subtitle; the actor performs HIMMLER’s halts and mistakes during the speech; and the actor reads what HIMMLER told to his subordinates after he realized that the security of the venue was not adequate. Since the camera changes the shot only when there are minute changes in the topic of the speech or when Himmler looks at certain person among the audience and points him out – the camera then looks up towards Himmler from the perspective of the audience, the suspense attached to the expectation and speculation towards such change becomes very intense, and the viewers of this film cannot help but thinking about the meaning and reason of such change whenever it happens. In this sense, one might ask the following question to watch this film: can this film be regarded as a minimalistic fiction that reconstructs a historical event that is HIMMLER’s speech in Pozen or a documentary that records an event that is a reading of the transcript of the speech? It would be useless to understand the question in the context of ambiguity between fiction and documentary, which is a prevalent discourse (that already feels banal) in recent years. The Himmler Project is an audiovisual lab that is established to dissect a grand fiction. Here, the grand fiction indicates what HIMMLER actively describes in his speech, which is a complete reset of Europe with Germany at its center in which the SS plays a leading role. Although the speech given by HIMMLER continued for about three hours, the part that has been repeatedly cited is the only five minutes or so where he mentioned the extermination of the Jews. What KARMAKAR does is to induce us to reexamine it under the context of a grand fiction generated by the Third Reich. Following KARMAKAR’s meticulous audiovisual analysis of Himmler’s speech, one realizes and is surprised by the fact that what is depicted in The Himmler Project is not a megalomaniac fiction that was limited to the era of Nazism but a fiction that continues to fascinate Germany. When The Himmler Project was released in 2,000, it might be seen as predictive. After fifteen years since the initial release of the film, it seems that HIMMLER’s speech terrifyingly resonates with the ‘Merkiavellism’ (as Ulrich Beck mentioned) that controls the European Union under the lead of Germany. In short, in a surprisingly simple way, KARMAKAR shows how a process of an elaborate and thorough ‘reading’ of a historical document - a document that is already fossilized and mentioned only in stereotypical ways - can involve contemporary issues. If we are not confined to terms such as fiction, documentary, or essay film, it might be possible that we call KARMAKAR’s methodology an audiovisual philology. In Hamburg Lectures, KARMAKAR pushes the methodology he experimented with in The Himmler Project further (again with the actor Manfred ZAPATKA). Hamburg Lectures is based on two transcripts of sermon lectures by Imam Mohammed FAZAZI who is known to have influenced the terrorists of the 9/11 attacks. KARMAKAR’s The Himmler Project and Hamburg Lectures are often compared to some works by Jean-Marie STRAUB and Daniele HUILLET or works by KARMAKAR’s cinematic mentor Alexander KLUGE in their experiment of the aesthetics of politics where the act of ‘reading’ is put forward. However, it is not right to compare KARMAKAR’s practice with the works by Alexander KLUGE or JeanMarie STRAUB and Daniele HUILLET where the directors draw potential meanings from the existing text or add new meanings by juxtaposing the existing text and other texts. KARMAKAR, attracted by the notorious texts such as the speech by HIMMLER or lectures by FAZAZI, finds his political nature in imploding such texts through his practice. (YOO Un-seong)