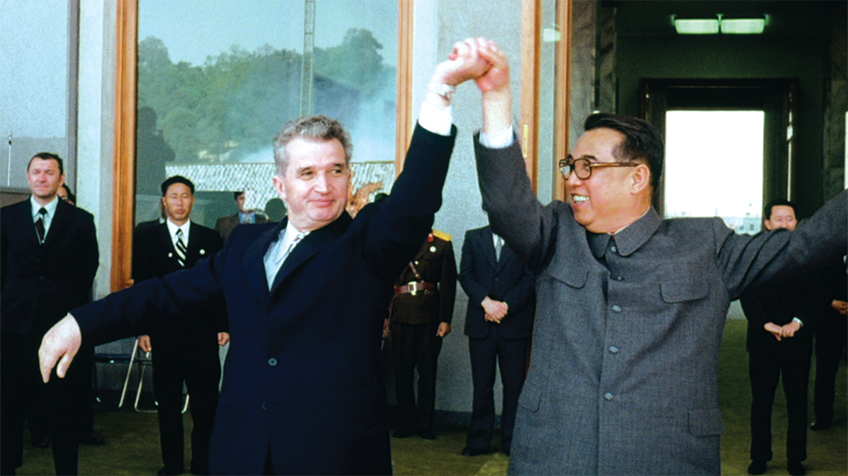 The Autobiography of Nicolae Ceausescu

Nicolae Ceaus¸escuˇŻs Autobiography A diary of a prisoner on death row I cannot help but mention the running time of three hours and seven minutes when introducing the film The Autobiography of Nicolae Ceausescu. In my opinion, the film is too long to sit in one seat and give undivided attention to the screen. However, the film does not want the audience to concentrate on every episode. Although Nicolae CEAUSESCUˇŻs Autobiography may seem inconsiderate to the audience, they can infer many things from the title of the film. This film is a story about RomaniaˇŻs president CEAUSESCU. Since the title states it is a biography, this film must be a documentary. The more accurate name of the title states that this film is an autobiography. Although The Autobiography of Nicolae Ceausescu is Andrei UJICAˇŻs work, he did not technically create the film. This film is a biography that CEAUSESCU madehimself – hence an autobiography. This is made possible by the use of the current so-called ˇ®hotˇŻ archive process.

It has been reported UJICA scanned through 1000 hours of video to create this three-hour film. Considering the director had to watch 1000 hours of footage, three hours is nothing. Moreover, compared to 24 years of the rise and fall of CEAUSESCUˇŻs political power which started from 1965, 1000 hours may seem like a flash. I am not simply referring to the physical time of 210,240 hours (24 years). As CEAUSESCU climbed the political ladder from General Secretary to the countryˇŻs head of state to President, his oppression to close the peopleˇŻs eyes, nose, ears, and mouth only became more brutal, and he thought his regime would last forever. Compared to the atrocity the people had to endure during CEAUSESCUˇŻs regime, the archives are merely ˇ®samples,ˇŻ and no matter how long any ˇ®documentaryˇŻ about him would last, it is nothing more than a complaint. As if everything was but a long breath, the director benevolently allows CEAUSESCU to make his last plea in the film. The film opens with footage of CEAUSESCU in military tribunal, then depicts 24 years of his rosy life, and comes back to court. The long sigh in between the question of whether or not CEAUSESCU acknowledges his crime and answer may inevitably seem like a short time to make a final objection for a tyrant who dreamed of eternity. Just like his hopeless answer that he did nothing wrong but sacrifice his entire life for Romania, the film unravels another world step by step with the use of found footage to portray another side of CEAUSESCUˇŻs 24 year regime. At this point people may be discontent with UJICA for being too generous. However, we already know what happens to the tyrant. Actually, the military tribunal scene where CEAUSESCU was hastily tried, convicted, and executed shown in the beginning and at the end of the film is a well-known footage in the Western world. If the film is indeed CEAUSESCUˇŻs autobiography, then the ending right before the execution where CEAUSESCU yelling everything is a ˇ°lieˇ± and ˇ°instigationˇ± can only be interpreted as the directorˇŻs resolute measure to reveal that the title of the film has no historical truth behind it. Many people still vividly remember the short footage of CEAUSESCU and his wife being executed, and it seems the director wants to declare that there needs to be a distinction between that historical event and his record of fantasy which involves control, directing, and manipulation. With Harun FAROCKI, UJICA already created Videograms of a Revolution in 1992 that portrays CEAUSESCUˇŻs final moments. If that documentary captures images of the intense five-day change and political power of the fall of CEAUSESCU, The Autobiography of Nicolae Ceausescu in itself presents historical political images. If the former is about showing what it is like to record a movie-like history, this film proves that history can be written (recorded) like a film. In the midst of ongoing violence and oppression, truth may exist in a state without being recorded. Regardless, archives are significant. History like film is an alibi because it points to the truth which could not be recorded. Lastly, nostalgia evoked by the film is a bonus not only for the generation that remembers the cold war and its final days but also for the people who only know capitalism as the only economic and political system. We encounter the fall of communist Romania which no longer exists that brought hope of capitalism in the 20th century when KIM Il-sungˇŻs card section or ImeldaˇŻs shoes are still vivid in peopleˇŻs mind – just like a prisonerˇŻs daydream full of splendor that lost its shine. (NAM Soo-young)