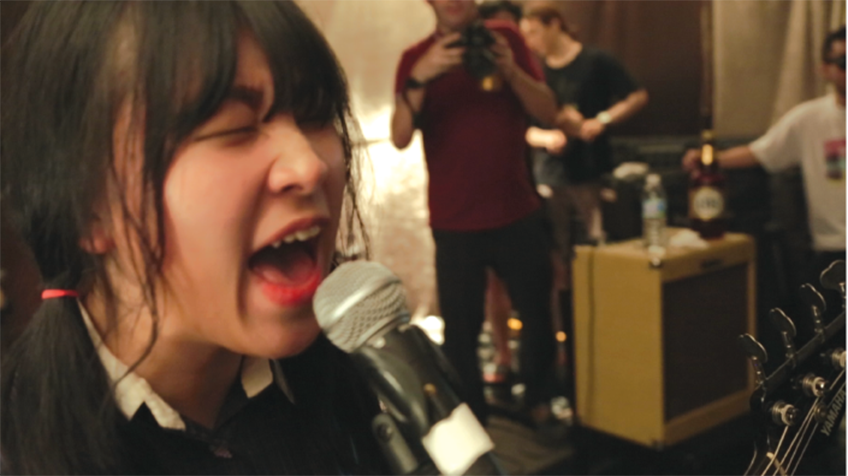 Sun-kyung puts on her make up. Gye-young put on her make up. Gye-young passes through classes and arrives in one class where she takes vocal music lesson, Sun-kyung spends dazzling night shouting out loud in a band as a band singer. According to the staffs, they have casted similar teenagers from both North and South, however Gye-young gives an impression that she is from a middle class family and Sun-kyung gives an impression that she is struggling from the edge of minimum wage, my god ness! This comparison contains lots of undertone and its not moderate, but the voices from two teenagers are more affectionate and special than comparing economy and military. Since the director got an opinion saying wouldn’t it be interesting to make a movie comparing two teenagers from North and South Korea, the director made the movie and it is interesting as he thought. Gye-young returns home late after hanging out with her friends and never puts down her phone just like an ordinary South Korean teenager leaving peacefully and feeling pessimistic about Korea’s division. The two fathers are not different from each other. Sun-kyung’s father just became an old dirty man instead of starting a revolution, and Gye-young’s father respects her daughter choosing to become a vocalist instead of doctor like him. Korea’s division is a grief for Gye-young, at least that’s what she feels, Gye-young says nothing has been changed. Sun-kyung feels that sparing a space in her heart to feel sad for the division of Korea is too much of a burden. Wallowing in awareness and more of kinship suggests that the generation of the two teenagers’ congregative direction will decide the future of the division. Most of all, if Sun-kyung and Gye-young watches this movie together, in fact, reunification will be in a close sight. If Sun-kyung and Gye-young meets in person, they will laugh of saying ‘I hate him.’ (BAHC Mi-gyeong)