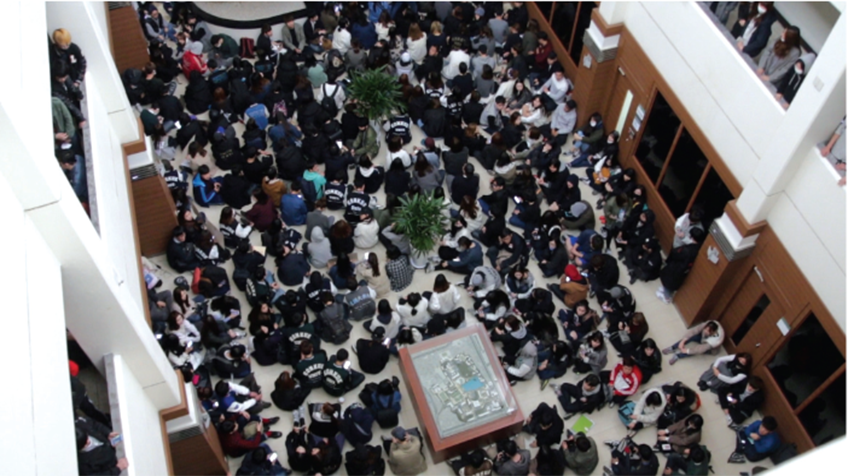 You Can’t Stop the Beat

Last March, the Konkuk University announced its restructuring plan to students that would convert the existing divisional system into department system in order to increase the department’s competitiveness. This plan contained the merge of the film studies department and the visual media department which offer completely different courses of study. From freshmen to famous alumni, students of the film studies department against the university’s one-sided decision making actively let the world know the situation by posting on SNS and one-person relay protests. You Can’t Stop the Beat addresses the students of the film studies department in details who got out of the lecture room to protect their department in danger of merger. On campus with spring in the air, what students face is a college system ruined enough to give up responsibility of education before justified efficiency(according to the Ministry of Education’s personnel reduction policy, some universities have closed or merged art departments that show low employment rate from several years ago). Watching the administration excludes students from a conversation with the president insisting procedures and institutions and seniors bowing low to juniors saying “sorry for losing the department” together is a not-so-funny sight happening in the middle of the university in the year of 2015. A camera faithfully and clearly records students confronting the situation with vehemence and tears. During the lonely and difficult fight, they finally find the way of struggle they are good at and feel confident. Planning a flash-mob event and dancing together, their solidarity tightens sharing the pleasure of being together. Students face the question, for the first time, in the college, ‘can art be judged by employment rate(or monetary value)?’ which they will constantly be run into during their life. Until now, the Konkuk University sticks to its original policy for restructuring plan applying from next year, ignoring students’ claim. The audience will ask themselves again if their school and work place are in peace. (KO Seok-hee)