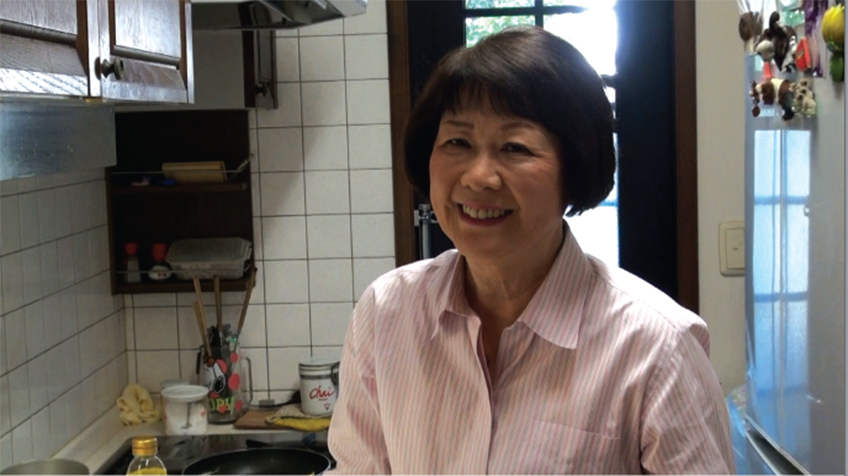 Aside from a few seconds in which the director appears briefly onscreen, only a single person is depicted in this film. On the beach, and in a small kitchen as she tells her story, we are at first unable to guess the meaning of the film’s title. Even as she sits formally in front of the camera speaking, dressed in clothes of pretty colors, with a nervous expression, telling us of how she contracted breast cancer 12 years ago, turned down surgery to extend her life, and is currently awaiting death, the significance of that number eludes us. But not long after the film starts, when the number -168 is shown, and we see her appearing to grow weaker, we know with certainty what the number means. Together, we are approaching the D-day of her death, and we must endure that time watching as her death comes inexorably closer. 100 days, 40 days, 17 days, 8 days... at a rapid pace the film advances towards her death. Her hair, which had been elegantly kept, gradually turns white, and finding it difficult to breathe without a respirator, she sometimes seems to lose consciousness. She looks back on her life, saying if she could travel back, she would want to go back to age 40, and the fact of her approaching death remains unchanged. Having feared death, or the pain that accompanies death, she appears to start acknowledging it, or accepting it. Watching the death of this woman, who is neither extraordinary nor ordinary, causes all of us to imagine our own death, which is approaching one footstep at a time. As for our own D-day, which none of us can possibly imagine, but which will ultimately reach us, how many days remain? (PARK Hye-mi)