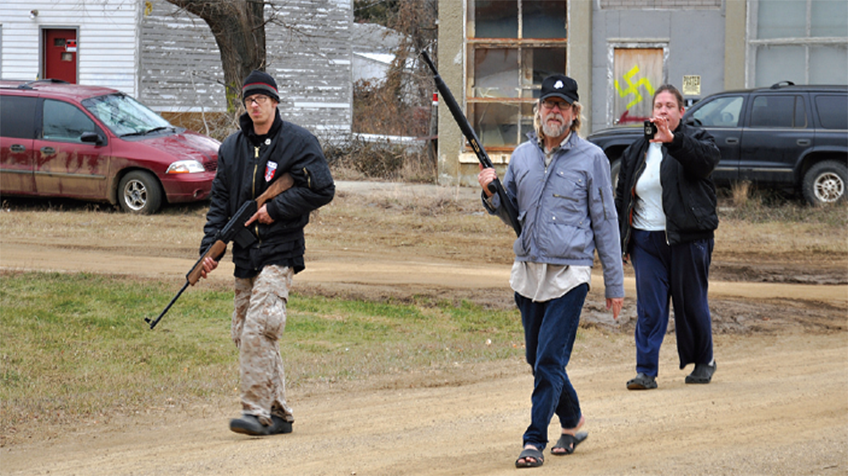 This film is an irony as a whole. It contains no illusions. A neo-Nazi white supremacist named Craig Cobb starts buying up properties in Leith, a tiny town of just 24 households. When it turns out other white racists are moving into Craig’s houses, the residents of Leith put up a fight against the outsiders. Welcome to Leith chronicles how they succeed in driving out those new ‘villain-neighbors’. Can we then assume that the objective of this film lies in exposing the activities of America’s racist groups and thus warning us about the danger of terrorism? Rather than pursing politically correct enlightenment, the film deeply engages with audiences and makes us consider the source of our questions by revealing what ironies and contradictions there are. Between the newcomers who claim that they too have the right to live in Leith, and the residents who hastily pass a new act and destroy Cobb’s properties to force his supporters out of the town, which side is more violent and segregationist? Shouldn’t we apply “freedom of thought” based on pluralism to the keyboard warrior Cobb’s ‘online racism’? In that sense, perhaps the film’s accusatory voice must be directed to the whole of USA, which, as a country, tolerates such extreme hate crimes. The history of slavery in the USA means that even in the case of Cobb, an Aryan advocate for pure blood, 14% of his genes is black. Furthermore, even among a group of people pursuing the perverted desire of racism, the democratic system based on numerical superiority takes precedence. Only within American capitalism could we encounter a man who plans to use his notoriety as a racist to promote his restaurant business. Above all, the USA is a frightening land where guns are allowed. (KIM So-youn)