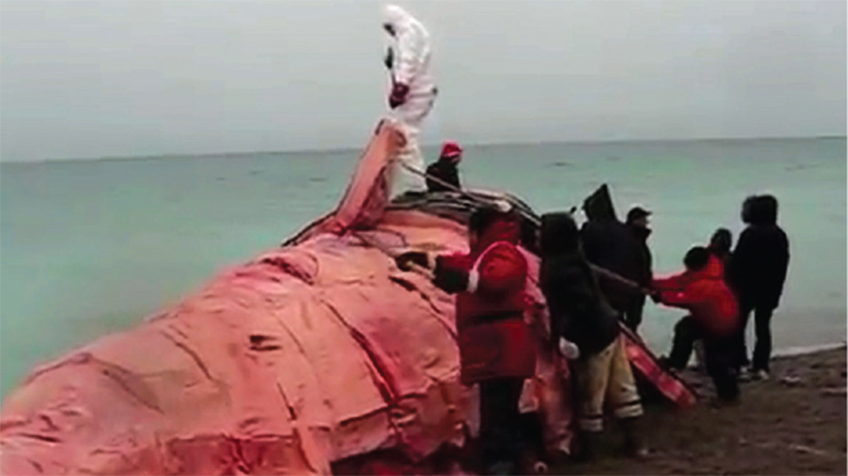 Quebecois filmmaker artist Dominic GAGNON has produced a series of found footage documentaries based on the compilation of amateur videos on YouTube, including Pieces and Love All to Hell (2011) and Hoax Canular (2013). In his new film Of the North, GAGNON takes as its subject various amateur videos on the North Pole, instead of vlogs that display teenagers’ apocalyptic monologues in Hoax Canular. In this film, boys and girls from all over the world perform their apocalyptic sensibilities to the camera in their bedrooms. By contrast, the subjects in Of the North are descendants of the Inuit that Robert FLAHERTY as a pioneer of documentary captured in Nanook of the North (1922). The amateur video clips produced and uploaded by the descendants deconstruct the clichés about the Inuit, which were prefigured by FLAHERTY’s camera and have been repeated in numerous conventional ethnographic documentaries. The portraits of their everyday lives, working for oil industry, playing extreme sports and rock music, and dancing to the hip-hop, etc., not merely undermine the exotic images of the indigenous culture but also reveal the traces of trashy and unbridled acculturation caused by their encounter with the Western culture.

If in Hoax Canular GAGNON creates a digital ethnography of the anxiety, loneliness, and narcissism of a generation that seems to eagerly await the end of the world, then in Of the North he takes his digital compilation style of collecting to calling into question the myth of ethnography (KIM Ji-hoon)​