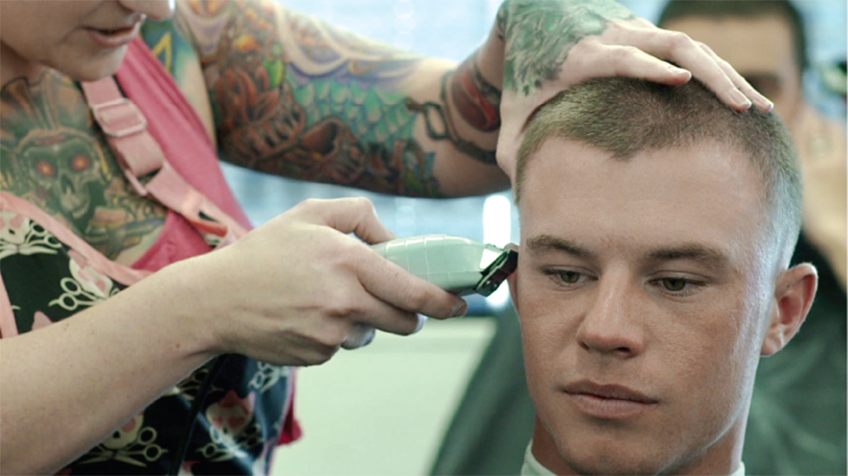 The documentary film, Killing Time is a kind of “war film” which focuses on soldiers dispatched to Iraq and Afghanistan. However, we don’t see any dramatic occasion which we see in other war films. Not only about military battles but also this film doesn’t care about psychological trauma of the soldiers. Just the camera watches the soldiers in Twentynine Palms, a small military town in the Mojave Desert, California back from Afghanistan enjoy their relaxed everyday life, while having their hair cut, joining in reading the Bible clubs and taking a trip to Las Vegas. Literally, they are killing time. However, soon audience realizes that the soldiers’ common days without doing the special which look peaceful evoke mysterious tensions. What they do we see in the film is not banal everyday life but an unusual moment for them. Twentynine Palms is a kind of transit place where they are laying over to move to another battle field and the time now they enjoy is a transitional period when they transform themselves from civilians into soldiers or from soldiers to civilians. With windy desert landscapes inserted and , without interviews or quotations from well-known scholars, the film director visualizes and auralizes what the “simple and common” days means to the soldier and the incompatibility they feel out of place among people who don’t understand the soldier’s everyday life is put in battle fields. Sometimes, the soldiers seem to perform the banality of everyday life carefully. Killing Time displays a common lesson but in an uncommon way that wars make our common everyday uncommon. (CHO Hye-young)