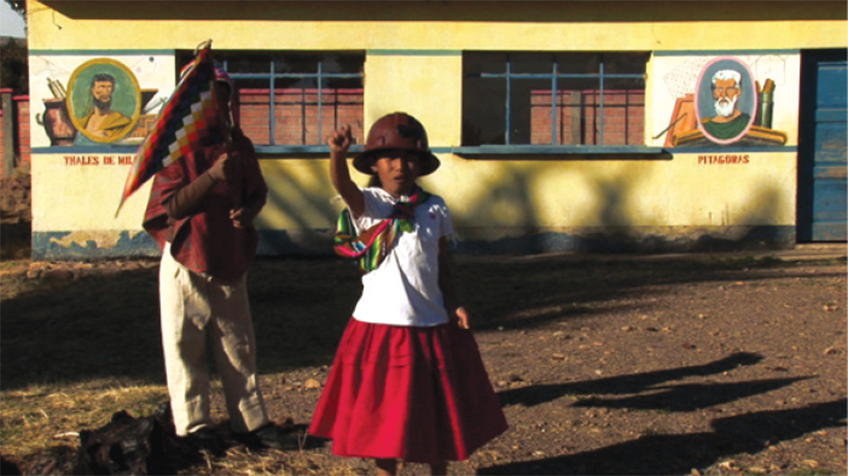 The Corral and the Wind

This film adopts a brusque tone. Offering no explanation for its temporal and spatial settings, the film presents a series of images. The camera observes everything patiently while the cuts remain simple and clean, and the editing leaves room for waiting. The work features children, childlike grown-ups, animals and their young. It is difficult to surmise in what ways they are related, what significance could be attached to the order in which they appear, or the reasons for keeping a record of them. Any attempt to create a story by putting together fragments of information becomes ineffectual. We must immerse ourselves slowly in uninterrupted newness; this is the categorical imperative found in the film’s archival spirit. Eventually we come to realize that the documentarist is presently visiting his grandfather’s hometown. His grandfather had left the Aymara village so that he could learn to read and write in Spanish, the language of the invaders. Nevertheless, the homeland is not portrayed as a pastoral or depoliticized space of nostalgia. Nowadays, children recite poetry at the village school. Carrying their own cell phones, they hanker after the bright lights of city life. They learn about the struggles put up by the indigenous people throughout their turbulent history. Across the blue sky above the homeland, airplanes fly by and noisy cities are only a short drive away. Does this trip filled with memories blow the whistle on the violence of modernity? The director’s perspective practices the phenomenological epoché or suspension of judgement, thereby appearing half indifferent like a passer-by who is observing the history of his or her own existence. (KIM So-youn)