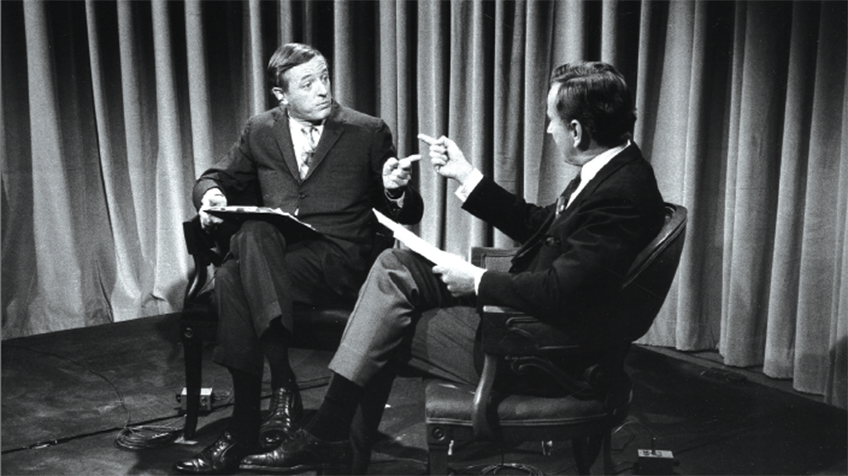 968 was a year when voices calling for diversity and acknowledgement of differences took to the streets, and cultural sensitivity crossed over to the stiff-necked arena of politics. But if the myriad of problems and conflicts we face today is not much different from that which occupied the streets in 1968, doesn’t that make the rhetoric about the potential of liberation in 1968 a misinterpretation or exaggeration? By presenting a trivial and isolated incident that occurred on national television in the US, Best of Enemies conveys the sense of despair that runs through both 1968 and today, but in a very light and cheerful manner. Back when television news was rated by Americans as their most reliable source of information but NBC’s news program was scraping the bottom of viewer ratings, NBC did a live telecast of ten rounds of debates between a conservative and a liberal on various issues facing American society, scheduled to coincide with the party conventions of the Democratic and Republican Parties. On the right sat William BUCKLEY, editor-in-chief of the conservative magazine National Review boasting hundreds of thousands of readers and TV talk show host known for his humor and intellect, while representing the left was Gore VIDAL, radical enough to claim that sex between homosexuals was “perfectly normal” in his first novel as early as 1948. The two engaged in heated debates on controversial issues ranging from the Vietnam War to social class and racism. But as they detested each other on a personal level, they ended up attacking each other with profanities in the ninth round. It was the first time that the bare face of intellectuals in all their mean and nasty glory was witnessed live by the people. Today, however, no one is shocked by the fact that debates are likened to battlefields where you zoom in on your opponent’s weak spot and sling personal insults at one another. The situation people faced in 1968 is still the same, hate has become the norm, and history seems in no hurry to move on. (YANG Hyo-sil)