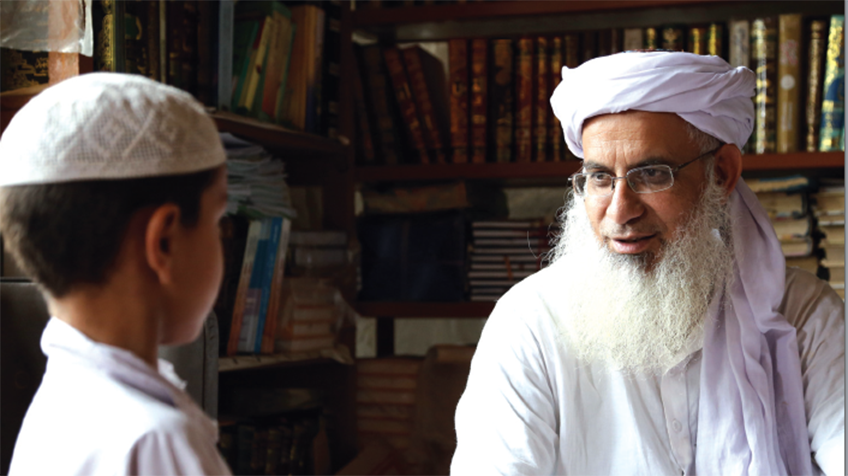 Aziz is the charismatic leader of the Red Mosque network whom the two directors of Among the Believers filmed at close range for five years. Having lost almost his entire family to an ’enemy’ attack, Aziz has accepted martyrdom as his fate. He is portrayed as a warm, intelligent and at the same time harsh man who dreams of uniting the world through Sharia law. Aziz and his followers also run madrassahs (Muslim seminaries) that provide free education, food and shelter to impoverished children who have fallen through the cracks of Pakistan’s public education system. The film calmly documents what the rest of the world regard from a distance as delusion – but claimed by terrorists as their holy cause and justified rage – through close-up reality filled with urgent events. On the enemy side are the proAmerican government of Pakistan and those who support her modernization. The camera does not pass judgement. So the scenes play out against a backdrop of despair arising from the realization that the only way to break free from this vicious cycle of violence is violence great enough to annihilate one side or the other. A foil to Aziz is grassroots activist Tariq, who works to save children from hatred and violence by building a school for them so they will not be driven by their poverty to depend on madrassahs. A devout Muslim, Tariq lives by a Koran that is different from Aziz’s. Tariq’s Koran teaches that taking one life is the same as annihilating the entire human race. Continued terrorist attacks force Tariq to close his school temporarily, and in the meantime, twelve-year-old Zarina, who had escaped her madrassah in pursuit of her dreams, is forced into marriage by her parents and becomes a mother. Almost all the (male) characters in the film have chosen their own paths according to their “beliefs,” be it dogmatic, repressive or democratic. The only character who is drowning in a life that has nothing to do with her own choice is Zarina, even though she was spirited enough to refuse to be schooled in a madrassah. Our poor Zarina. (YANG Hyo-sil)