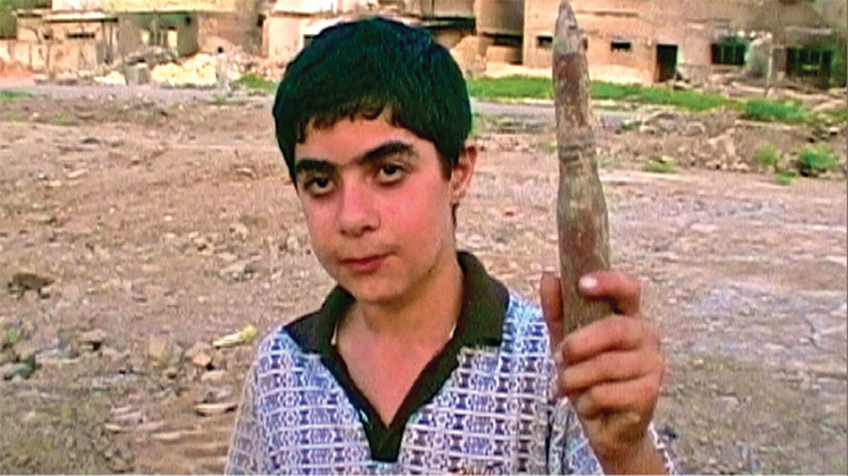 One may expect a new adventure story from this film, which chronicles two years in the life of an Iraqi family, before and after the George W. BUSH administration invaded Iraq in 2003. However, the adventure story that we find is neither the Odyssey nor Scheherazade's tale. Rather, it could be described as an apocalyptic chronicle of modern times. In the portrayal of the director’s family and friends as well as their everyday life in Baghdad and nearby cities, we witness the violence inflicted upon them by US missiles that were designed to bring down Saddam HUSSEIN. Furthermore, the film sheds light on the suffering of Iraq and its people brought on by the image of ‘the axis of evil’. Perhaps the running time of 5 hours and 30 minutes and the subtitle ‘Fall and Battle’ are not enough to convey such an apocalyptic discourse. Nevertheless, this documentary reminds us of a ‘symphony of death’. When Haidar, Abbas FAHDEL’s 12-year-old nephew, talks about his fear and expectations of the war, we are already aware of his impending death soon after the American invasion. The images of everyday life disappear bit by bit as if they are dying out and withdraw into silence like majestic views of historical sites. The film seems to be a hymn set at slow adagio tempo. Not only does it examine the power of turmoil encountering neo-realism, but it also sensuously proves Alain RobbeGrillet’s argument that ‘reality escapes significance and shows only their lives and deaths’. It is for this reason that Haidar reminds us of R. Rossellini’s Edmund. (JEON Sung-kwon)