Over the past decade, DMZ International Documentary Film Festival has grown into the leading documentary festival in Korea and Asia. Now it presents its vision and direction more clearly with the documentary selections and program events. In overall, the number of Korean and Asian films has significantly increased in overall. Also, the quality and number of submitted Asian documentaries introduced in Global Vision and Showcase, as well as International and Asian Competitions, have increased considerably. DMZ DOCS intends to discover and introduce talented filmmakers and Asian documentaries that are actively progressing, and serve as a bridge between the world and Asia. It will be the year to confirm the status of DMZ DOCS as a significant platform to meet Asian documentaries and build partnerships.

Korean documentaries show drastic growth both in quantity and quality this year. DMZ DOCS introduces 64 of short and full-length Korean documentaries this year, and the number of films is almost doubled up than the last year's 38 screenings. Along with the increased number of documentaries, DMZ DOCS also confirms the current status of Korean documentaries capturing the essence of Korean society while boasting the stable level of completion.
DMZ DOCS is now the platform that covers all Korean documentary films. To celebrate the 100th anniversary of Korean films, DMZ DOCS hosts a special exhibition focusing on Korean documentaries. <50 Views on Korean Documentary> presents 55 documentaries that 50 documentary critics and reporters recommend to the audience, and various events including screenings, discussion sessions with critics, publishing critiques, and poster exhibitions.
Changes have been made to the DMZ Vision section, which has been reflecting the identity of DMZ DOCS. The new section called DMZ Vision: Inter-Korea is established to focus on issues of South Korea and North Korea. DMZ DOCS intends to take a fresh approach to the issues of the two Koreas on the Korean Peninsula by unraveling the foreigners' perspective on North Korea, the North Koreans' views on North Korea, and the diaspora of dispersed families in North and South Korea.

DMZ Industry, the new program launched this year, will contribute to vitalizing the documentary industry and productions in Asia and Korea. The production support program is carefully built to assist all stages of production, including planning, production, post-production, and distribution. It also includes DMZ Docs Pitch, an industry-specific platform to find co-production and investment opportunities, and DMZ Docs Match, a business meeting program for the industry and the projects. With these programs, DMZ DOCS will focus on building 'quality network and solidarity' between all the related parties. Also, DOCASIA with the representatives of documentary-related institutions in Asia will take the first step. DMZ DOCS will solidify its status as the exclusive hub for documentaries with the valuable programs and also enhance DMZ DOCS' status as the leader of the Asian documentary industry and trends.

4. DMZ DOCS Talks to the Audience

Reflecting the reality that documentary films have relatively few opportunities to meet with the audience, DMZ DOCS will try to narrow the gap between the documentary and the audience. DMZ DOCS will deliver easy access to the audience of Goyang and Paju City, the base of the festival, as well as the audience from other areas and help the audience to enjoy documentaries with various programs. The audience can participate and communicate at various programs and events at DMZ Todoc Todoc (Talk+Documentary), the integrated program including Docu-docent, Master Class with the world-renowned directors, lectures and discussions about films, and talk sessions with public figures.

The area near Baekseok Station in Goyang City is where the main film theaters are located. Setting up DMZ Square and DMZ Place in the area will bring various events and convenient facilities closer to the audience. It will also heighten the mood for the celebration.

DMZ Docs combined the existing Family Sections into DMZ Open Cinema section and will introduce outstanding documentaries with quality and popularity. And the famous works among them will be screened at DMZ Place, the outdoor screening facility set up in Ilsan Bellacitta, during the festival along with other performances. After the opening ceremony, DMZ DOCS will arrange outdoor screenings and performances. It will be held at the special outdoor stage on September 21(SAT) and 22(SUN), as a part of the audience-friendly programs. The stage is at the parking lot in front of Imjingang Station.

5. DMZ DOCS Follows the Possibility and Scalability of Documentaries

The exhibition is planned that the audience can enjoy 'documentary' both at the theater and exhibition site, and DMZ DOCS came up with the idea after much contemplation to find the original way. As the popularity and the professionalism of documentary films coexist and thrive with criticism, DMZ DOCS pays attention to the platform of sustainable and new criticism. DMZ-POV is another new attempt to build a platform where critics can present their opinions and a frontline where the audience and films meet. DMZ-POV will present the new Asian view about the documentary films fitted with Western discourse. It will also introduce documentary films to the audience who feels more comfortable with feature films.

The Korean Demilitarized Zone, DMZ, is the only demilitarized zone in the world. After the settlement of the armistice in 1953, the Demilitarized Zone has been created. The area is 4km wide and 248km long and has the military demarcation line in the middle. And it represents the failure of achieving the dream of unification. Although the land is full of memories with great pain, it is also a treasure trove of beautiful and phenomenal natural ecosystems that have been hidden. Although DMZ was where violence and tragedy began, DMZ DOCS hopes that it could become the place for the festival. So, people around the world could gather and celebrate the messages of peace, communication, and life with documentaries. Documentaries are windows reflecting earnest introspections of the world which convey fresh enlightenment to understand the world. And they genuinely touch our hearts because they are original and honest.

This is the value that the DMZ International Documentary Film Festival wants to share with the audience and is the indicator that DMZ DOCS should follow while making progress. Now, DMZ DOCS opens the window to the world, from where people would unite as one with documentaries. 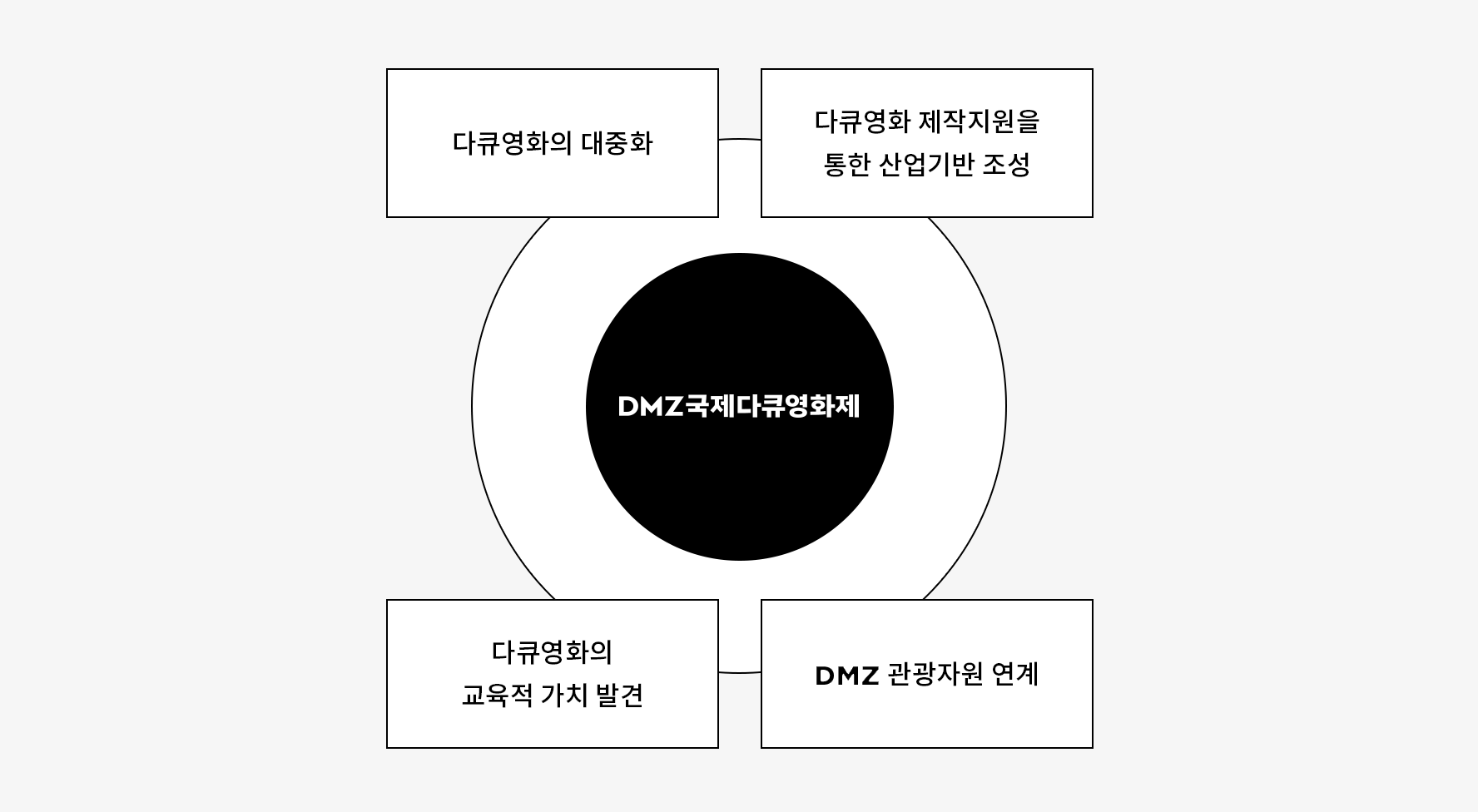