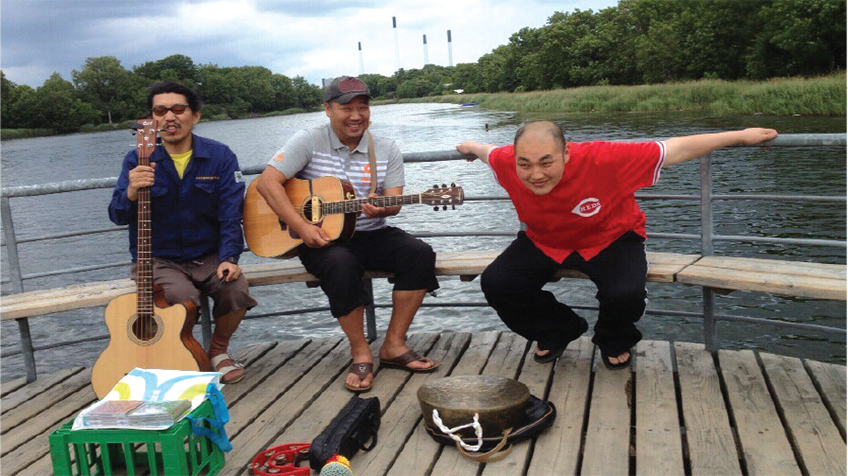 In the middle of Seoul’s urban landscape, a small concert has been organized. The three members of a rock band named the Anakin Project have their own jobs during the day and enjoy performing music on the side, dreaming of a life away from the city. They may seem an eccentric group and their performance may even appear rather unskilled. The music they play sounds like a cluster of murmuring noises, making them seem like unworthy musicians at times. In short, they completely destroy what preconceptions we may have about bands. Nonetheless, observing their behavior and listening to their music throughout the film, there comes a moment when we feel oddly fascinated by the band. We become curious about them. The seemingly ordinary band members play music that is far from ordinary, and begin preparing for the summer music festival in Christiana, a famous hippie community in Copenhagen, Denmark. The community was set up some forty years ago when squatters in Copenhagen occupied an old military base. Likewise, the three members of the Anakin Project prefer to break free from the city’s cutthroat competitions and relish the environmentally friendly communal lifestyle. It seems that the Anakin Project – which is perhaps geared towards anarchism – must find themselves at home in Christiana. The film depicts the way the music of the Anakin Project encounters the life of those in Christiana. The camera faithfully follows their music and their everyday life. As a result, space and music are brought together naturally, and the film achieves a harmony between its form and contents. Gradually, we come to appreciate the music of the Anakin Project, blended into the life in Christiana. The film reminds of the ecological villages being set up in Yeongam and Wanju. Their lifestyle, which is slow yet not idle, not so fast yet unhesitating, goes well with the film’s overall mood. The experience of watching Hurry Up, Slowly! is akin to that of travelling. Just as the members of the Anakin Project learn and grow further through performing and staying in Christiana, we feel that we too have created a little space within our hearts after listening to their music and travelling with them in the landscape of communal and ecological existence. (CHO Young-kag)