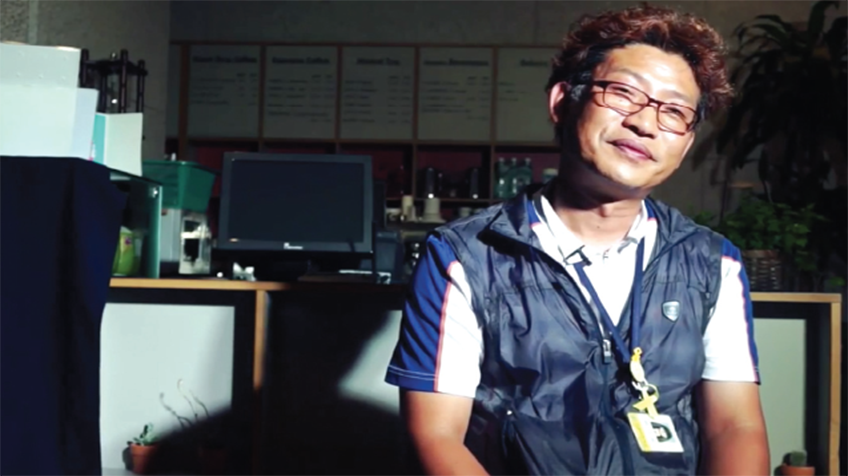 It’s been over a year since the Sewol tragedy. Yet, nothing has been clearly explained or resolved. In fact, there has not even been a proper stage of mourning regarding the Sewol tragedy. What this documentary proposes is neither commemoration nor mourning. It is in no way the film’s objective to move on to the stage of commemoration after much grieving. We are invited to recognize that it is impossible to accept as our own the sorrows of the mothers who lost their children and the young students who lost their friends and survived. A documentary could offer a kind of emotional catharsis through images of condolences. Yet, we are not allowed this kind of emotional catharsis in Upside Down. The film limits its interviewees to four fathers. There seems to be a hidden suggestion here. It is that we should at least be fathers to the victims of the Sewol tragedy. The choice to focus on fathers is not because their grief is any less than that mothers or young friends. The fathers in the film are figures who transcend gender and degrees of sorrow. This is particularly relevant to the film’s criticism of the mass media. The underlying criticism throughout the whole film points out that the media may have just stood by and even hidden from the view what should have been done, while reporting stories of tears and stirring up emotions. Therefore, the film keeps a distance from the stage of sorrow or grief represented by maternal instincts or peer groups. Instead of appealing to our emotions with sentiments, the film chooses to appeal to our intellect with reason, showing how preposterous all this is. Upside Down could be seen as a kind of manifesto that urges us to concern ourselves about what could be an adequate compensation according to the human logic instead of the logic of capitalism. (KIM So-hee)